As we are looking forward to getting back to places that we enjoyed before the Lockdowns; Im taking a happy pub crawl down memory lane to find the origins of our amazing Pudsey pubs (with thanks to Ruth Strong of Pudsey & District Civic Society – more details at the end of the blog).

This blog will feature on the early origins of Pubs we still have as going concerns – Later entries of this blog series will feature the fascinating Pubs that are only a memory… (Note relating to licensed premises operating as Pubs (not Bars or Clubs) in Pudsey).

The Pub as an institution has come a long way in the last 200 years, and much of our heritage can be traced around how the pubs sprang up in local areas, and how this was driven by legislation and social changes.

The first mention of Innkeeping in Pudsey goes to Richard “The Taverner” of Ulversthorpe (Bankhouse) from the 1200’s. Ulversthorpe connected Pudsey to Tong and the communities to the South around Morley, an important trade route through the town…so it would make sense to build a tavern there. Fast forward to the start of the 18th Century and public houses are becoming firmly established, some we know today such as the Golden Lion and Masons Arms can trace themselves way back to this era.

Initially, a “tavern” was a place for travellers to rest, drink and receive lodging. The terms “tavern” and “inn” are what most of us refer to today as a hotel.

The Public House as we know it really took off after the 1830 Beerhouse Act – which created drinking places outside the control of the Justices. It was intended to encourage the sale and consumption of beer rather than hard spirits (they had a lot of problems with rampant gin drinking, even back then)…

Lets have a closer look at our pubs, starting with the oldest left 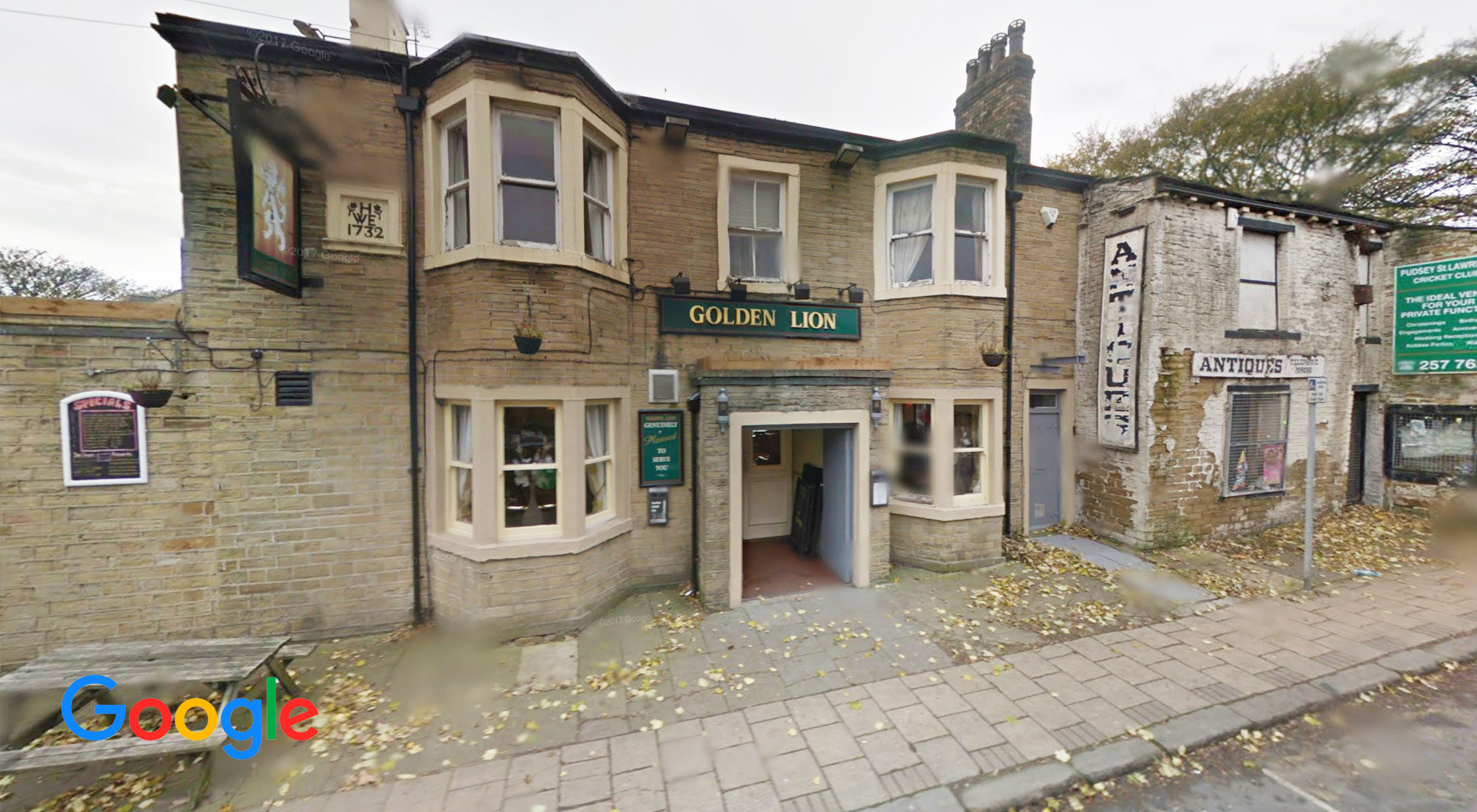 Although it’s survived 289 years as a pub, the Golden Lion building itself has had several make overs to its appearance (as was common to most of our older pubs).

The building has a date stone – “HWE 1732”, the initials are for William Hutchinson and his wife Elizabeth. In 1730, William leased a parcel of land at Chapeltown from Lord of the Manor Charles Milner, for the duration of 999 years. By 1732 William and Elizabeth had built an Inn trading under the name “The sign of the Golden Lion”. Eventually the property also had a brewhouse, seven cottages and two barns.

In those days the Golden Lion may have been the only truly public building in the town where people could meet and freely discuss matters, socialise and trade. This convenience meant that the Peculiar Manor Courts were often held there – this was a civil court that discussed probate of wills and land sales; citizens could be summoned to attend. Important events linked to this where the 1811-19 Parliamentary enclosures of the Pudsey Moorland, and the inquest into the alleged murder of Joseph Blackburn at Radcliffe Lane by Thomas Fairfax Carlisle.

The Golden Lion offered the first Pudsey taxi service, having its own sleek 4 wheel Post Chaise with horses for hire.

Still remembered is the bowling green at the back of the pub, opened in 1878 “the largest and best in the district”. Other firsts for the Golden included a mahogany billiard table and a pool table long before anyone else had them.

The pub has had many memorable characters as landlords, including ex Leeds United player, the late Byron Stevenson. 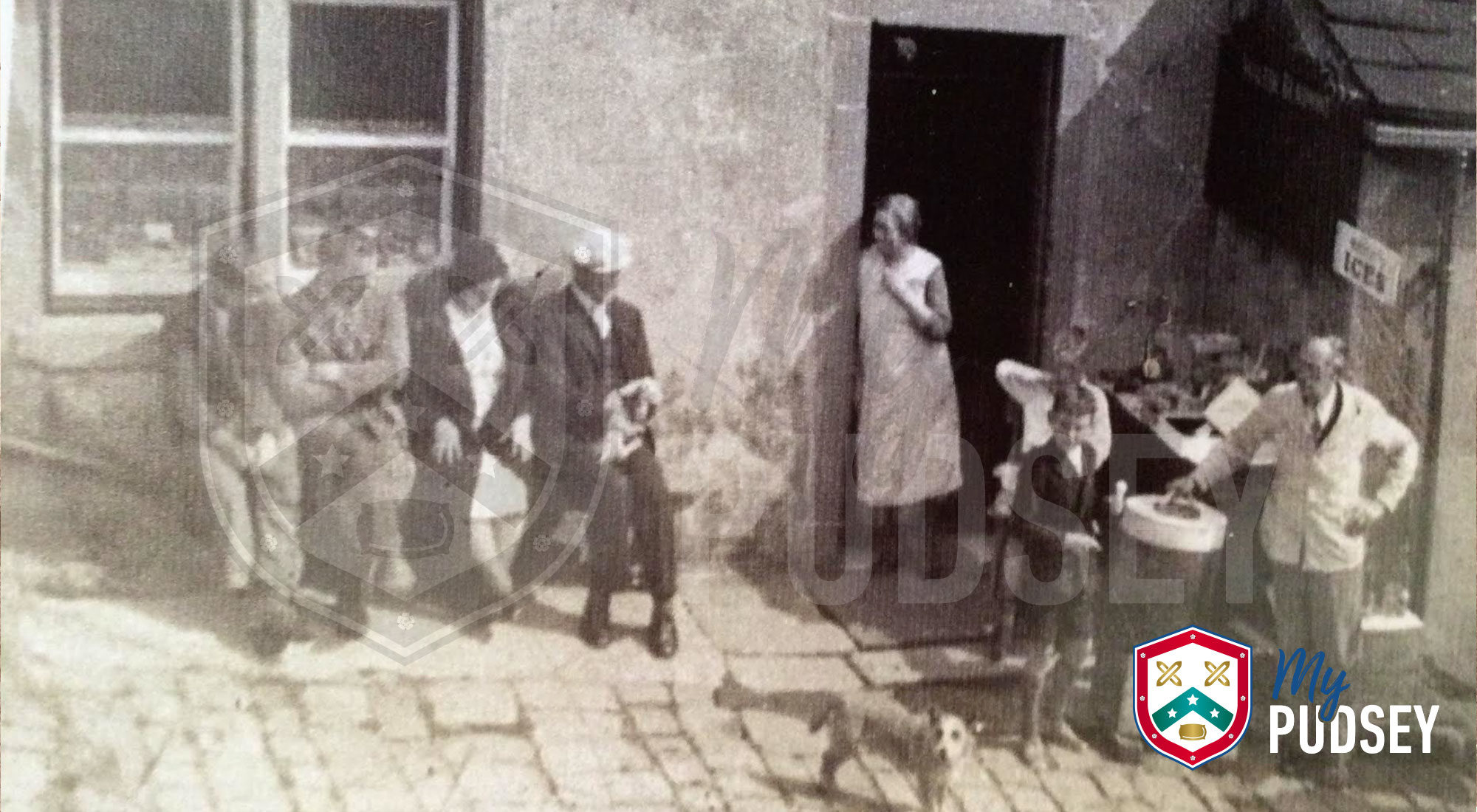 The Bankhouse became a pub circa 1835. Being a rural pub it quickly gained a reputation for country sports and outdoor pursuits…

The strangest of which was the very popular terrier racing – the dogs raced around the valley below as a crowd placed bets. For this a tower was built behind the pub as a viewing platform, nicknamed the Eiffel Tower, its base still makes up part of the beer garden.

The Bankhouse has always had that country pub feel and its views across Tong valley are something special. 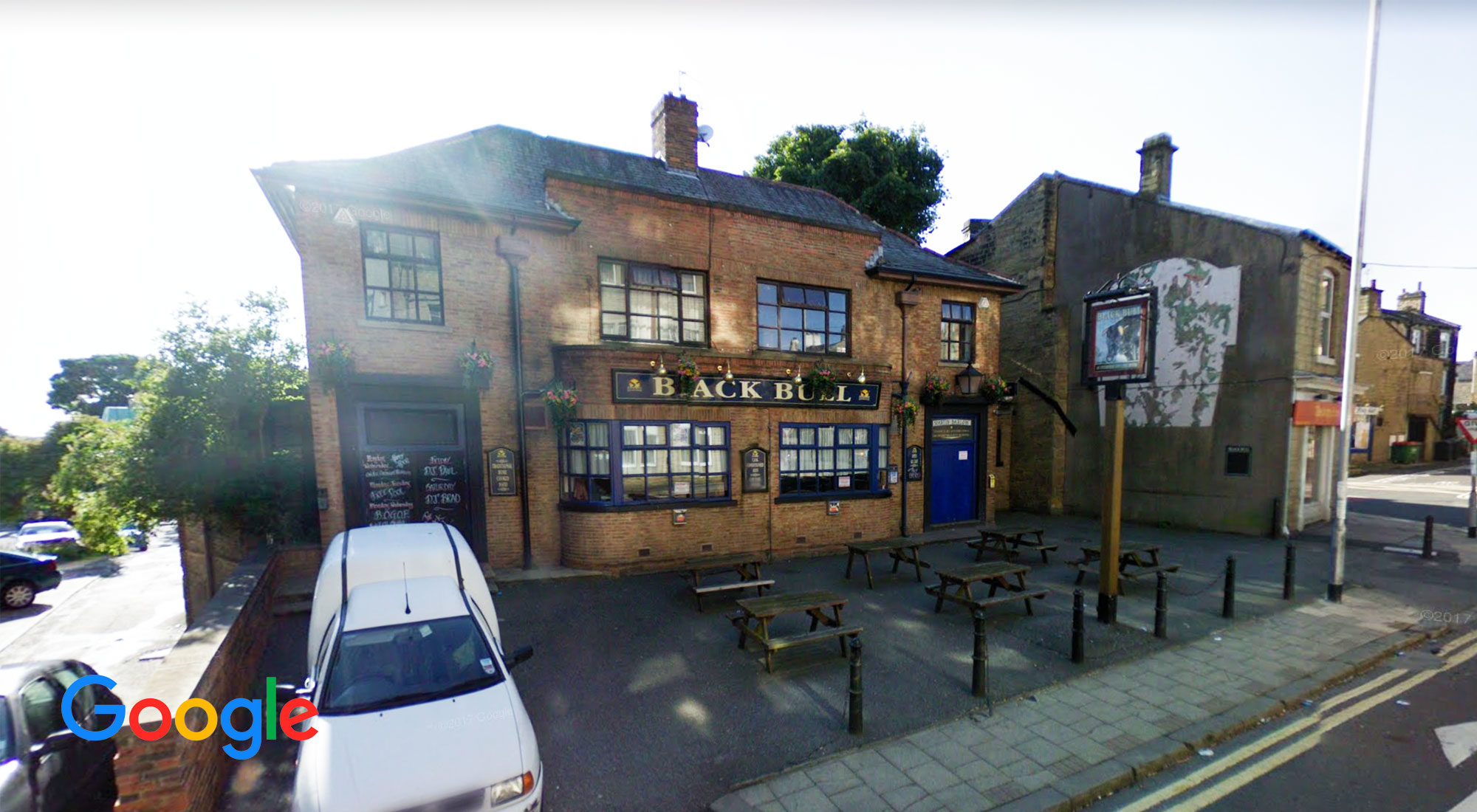 The pub we see today on Manor House Street was completely rebuilt after WW2 keeping its name of the Black Bull until it rebranded as the “Sports” during the 1980s. The pub reverted back to its maiden name until being acquired by Wetherspoons and being re-christened “The Crossed Shuttle” in reference to Pudsey’s proud textile heritage.

The original Black Bull was built on the same site but closer to the roadside before 1803. The name hails from the old Waver Green district which had a cattle trough, pond and grazing, it was often a site for stock fairs. The area behind the pub was long used as a stock yard and abattoir for the local butchers, notably the Beerman family.

During the Victorian era the pub was host to many old soldiers reunions who had fought in the Napoleonic and Crimean campaigns, as well as hosting many local societies and Lodges. The Black Bull was also a favourite haunt of Pudsey’s off duty Fire Brigade and also a meeting place for The Board of Health – the fore runner of the Town Council. 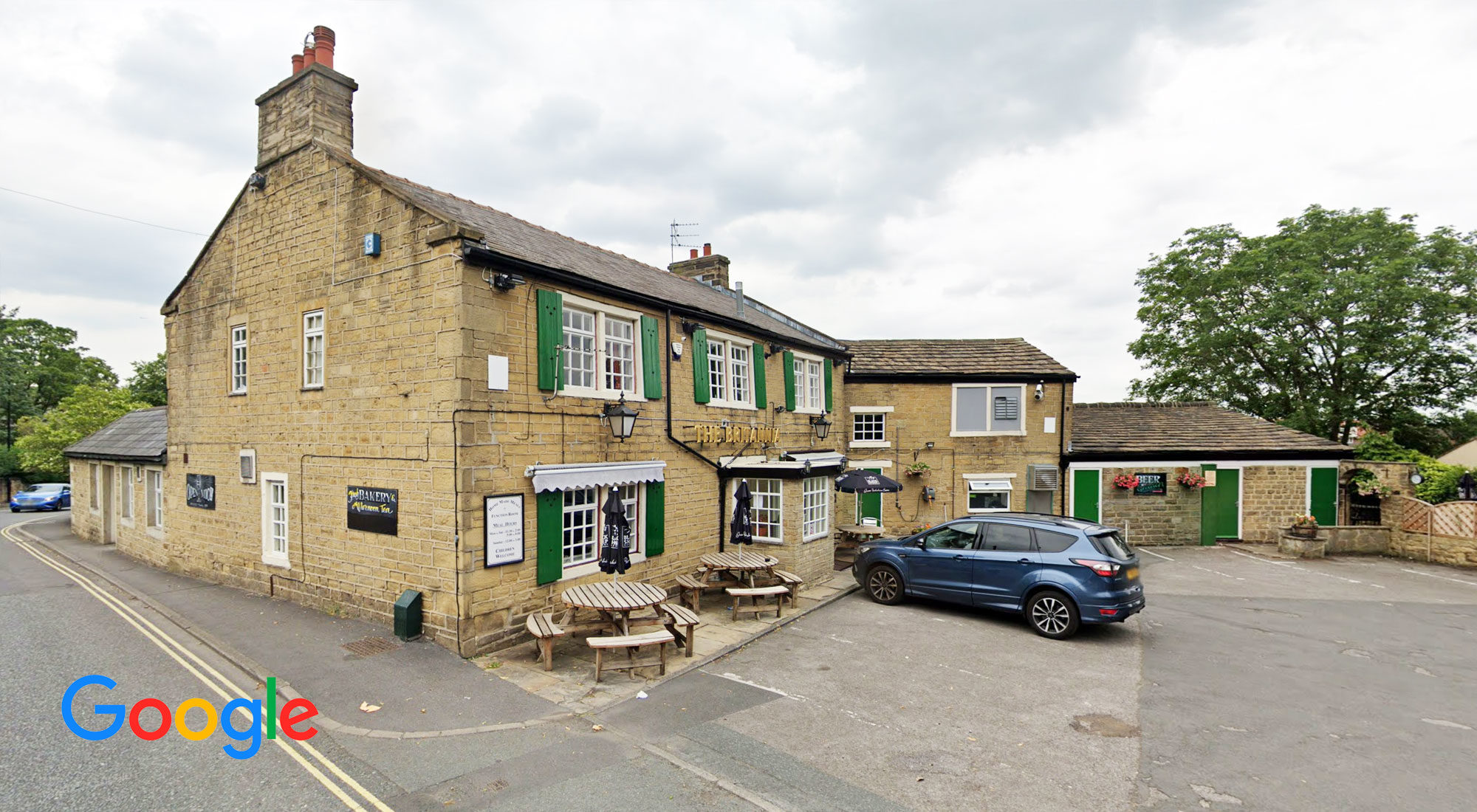 The Brittannia Hotel possibly started life as The Bell circa 1790 and used its next name The Kings Arms from 1842 until 1881. The pub was acquired by the Hinings family during the 1830s – they already had the Masons Arms as a going concern.

The Hinings kept themselves busy also being farmers, cloth manufacturers and mill owners – they quickly became one of the richest families in the town.

By 1881 the Britannia Cricket Club had bought the adjoining field to build a new ground (after the old ground had been sold to build Pudsey Park). The Kings Arms changed its name to associate with its popular new neighbours and cater for the large match day crowds – cricket was fast becoming the most popular spectator sport in Pudsey at this time.

The Britannia was one of the first pubs in Pudsey to offer food – something that still continues to this day. 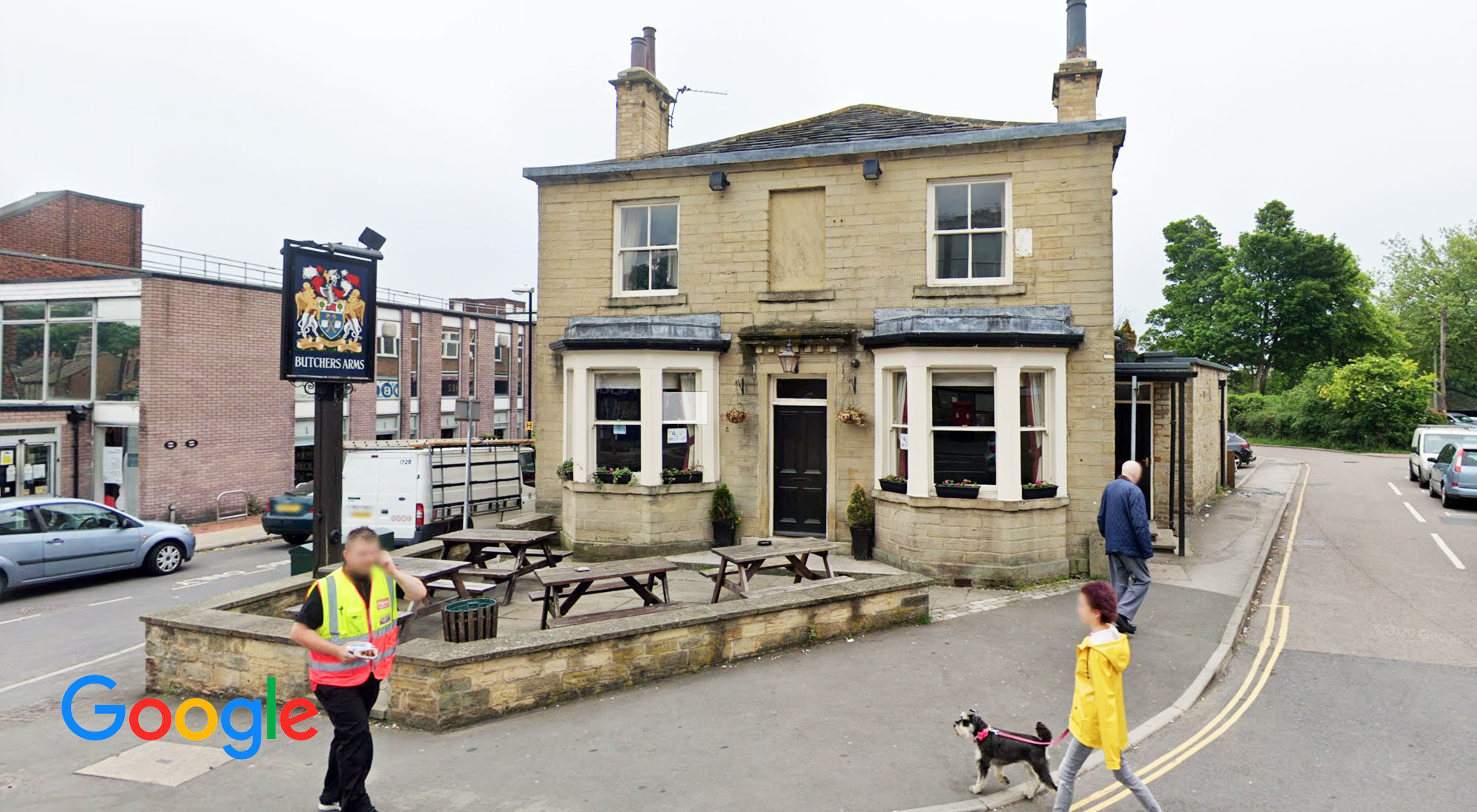 The building on Church Lane was originally part of a longer terrace. It was used for a long time as a meeting place and hosted the fledgling Mechanics Institute until converting in to beerhouse circa 1870 – the Institute moved to the present day Town hall building. The change to a beerhouse was boosted with the establishment of the nearby marketplace in 1879.

During the 1920s the pub was taken on by ex foundry man Fred Porter, his daughter would go on to find fame or infamy as “Woodbine Lizzie” down in Leeds. Lizzie lived a vagrant lifestyle and accosted all comers on the cadge for cigarettes or pipe tobacco. She was renowned as a lady of choice words with a blunt and vulgar vocabulary.

The Butchers has for long time been the Town’s only Sam Smiths Brewery pub, and as such had the advantage of serving their very competitively priced range of beers.

Find out more in the 2nd part

The next part of our series lands in just 2 days, if you want to know more about pubs such as The Commercial, The World’s End and more you won’t want to miss it.