As we are looking forward to getting back to places that we enjoyed before the Lockdowns; Im taking a happy pub crawl down memory lane to find the origins of our amazing Pudsey pubs.

If you missed part 1, click here to see some of the pubs with the oldest origins. 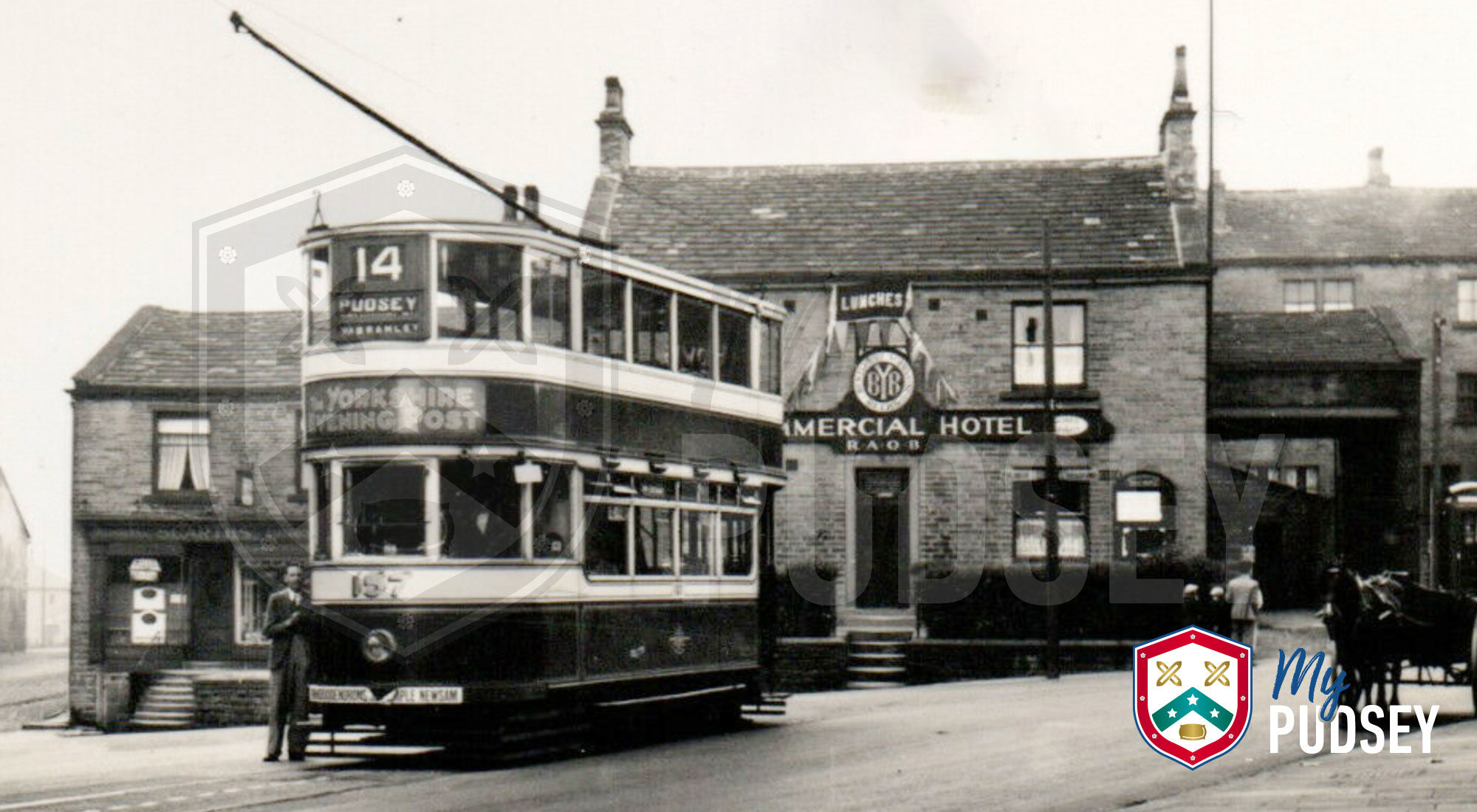 First recorded in 1838 at its present location on the corner of Chapeltown, the early Commercial had a reputation as a good place for politics, business dealings and sometimes a punch up (usually featuring publican Titus Hainsworth from the Kings Arms).

It must have been a respectable venue despite the high spirits as the first meetings to form a Local Board of Health, meetings of the Pudsey Floral and Horticultural Society and the inaugural meeting of the Pudsey Carnival committee where held there. The pub must have been keeping a well stocked bar as the Pudsey Borough Brass Band also used it as a base.

The pub also hosted its share of inquests, including the tragic inquiry into famous local firework maker Benjamin Scott of Bankhouse, who in 1863 blew himself up and gassed his own family.

Photos of the Commercial from 1908 onwards show the pub with the tram terminus outside on the street, the pub advertising Bentley’s Yorkshire Breweries and bearing the letters RAOB (The Royal Antediluvian Order of Buffaloes, the order started in 1822 and is known as the Buffs to members). 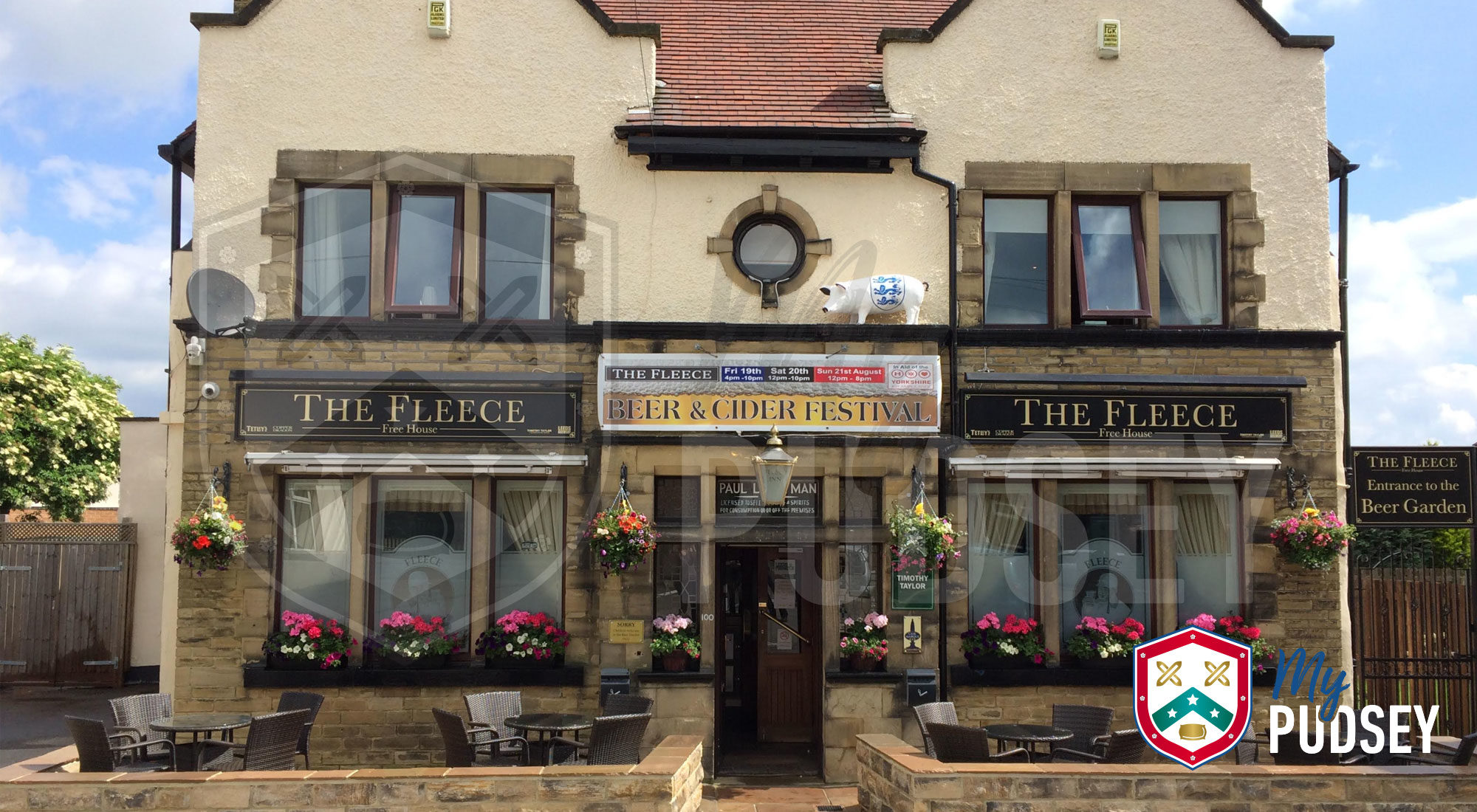 Converted from a much older building dated 1741, The Fleece started out life as The Smiths Arms, opened as a beerhouse by blacksmith John Young. In 1838 the Claughton Garth mill was built next door, two years later John Young sold the pub to John Northrop who renamed it “The Fleece”. John’s brother Joseph Northrop was the owner and licensee at the New Inn (later renamed The Park Hotel).

The Fleece was a very early venue for Pudsey St Lawrence cricket club in 1847, taking supper there after their season finale in what was only their 3rd year of playing. Last year the club celebrated its 175th anniversary.

Fartown was something of a tough neighbourhood in this era – John Driver described the local miners getting so drunk in the pub they could barely hit each other. Things would get even livelier in 1890 when the Irish Navvies arrived to build the Greenside tunnel.

Today The Fleece is highly regarded as a friendly and warm establishment with multiple CAMRA awards for its beers. 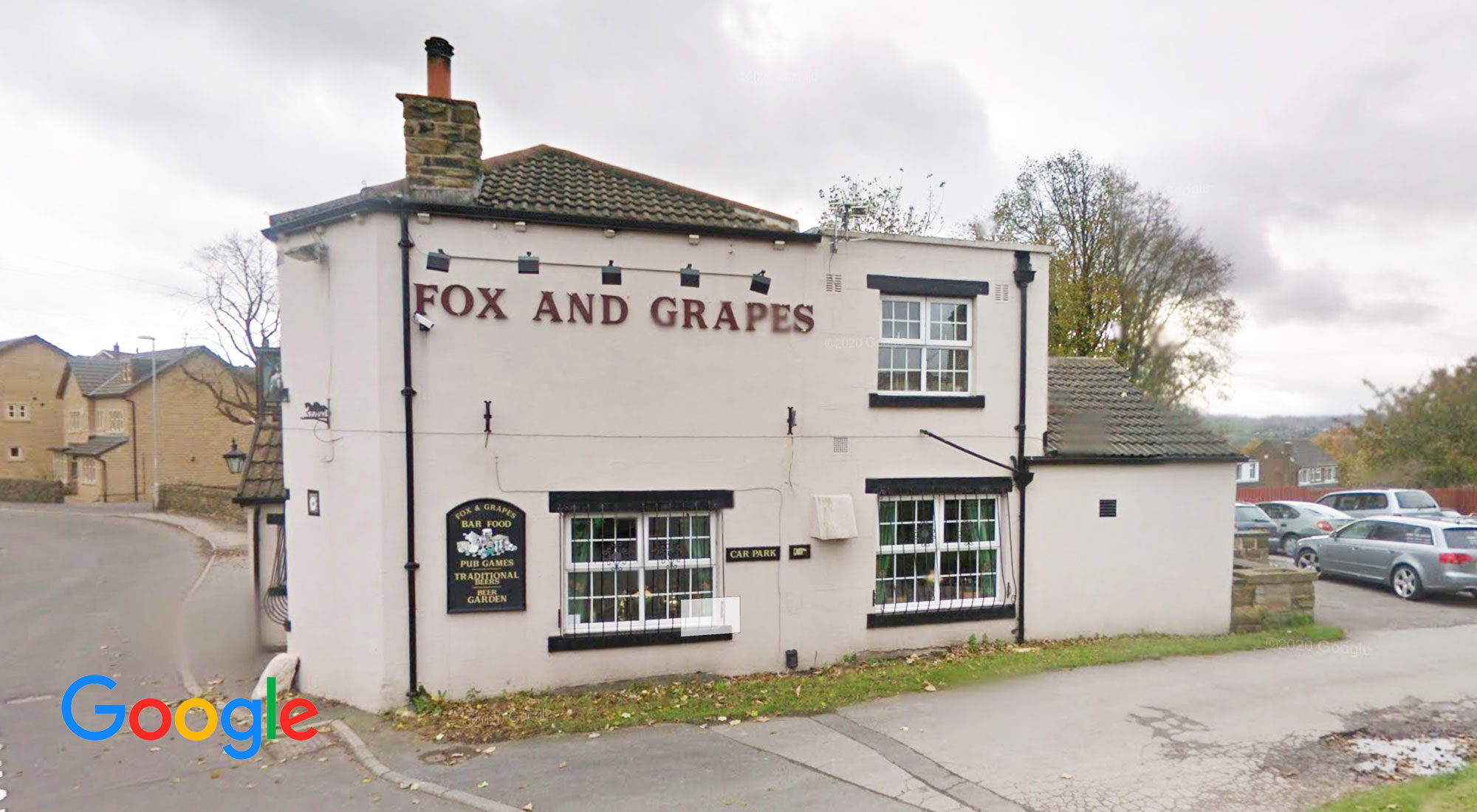 The Fox & Grapes dates from circa 1839 at Jumbles Well, another Pudsey pub with a great countryside atmosphere that started life as a beerhouse.

The pub may have been a favourite local for the navvies building the railway embankment across Fulneck valley (Europe’s tallest).

The Fox was always famous for its pub games such as dominoes, darts and skittles, they even had their own clay pigeon shooting club.  It has retained its cosy atmosphere and is a favourite stop after a good walk through the valley. 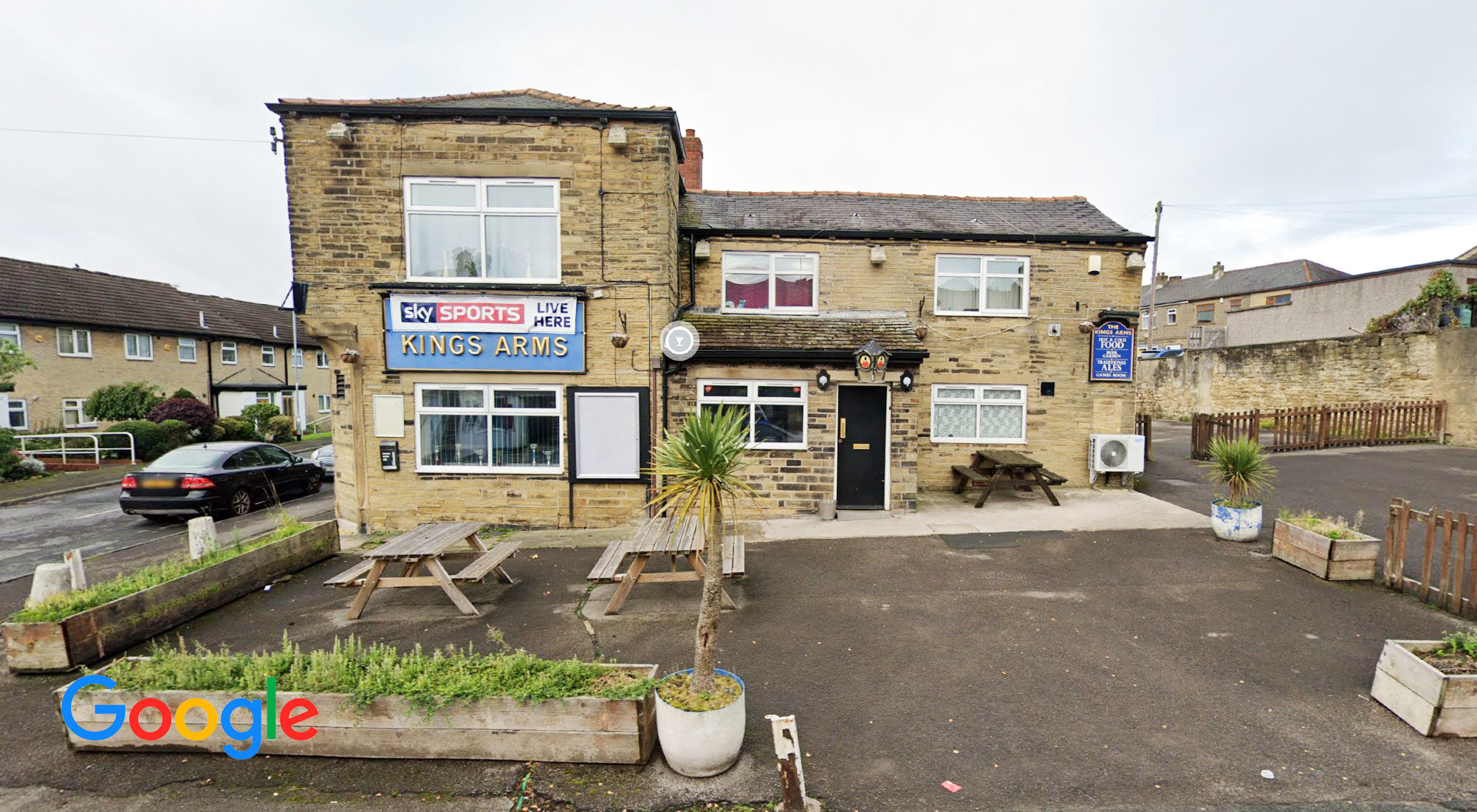 The Kings dates from circa 1822. The early history of The Kings Arms is also that of the Tunnicliffe family. Joseph Tunnicliffe Senior bought a plot of land on the corner of The Green, close to where the village stocks were located. Within 15 years the Kings Arms had been built on the site and became one of five Pudsey pubs run by the Tunnicliffe’s – the others being the White Horse, White Cross, Travellers Rest and Central.

One advantage of the pubs location, set back from the roadside, was it could host the Chapeltown fair – which was a half yearly cattle market and rivalled by a similar one in Lowtown.

Joseph Senior is remembered along with family members Benjamin and his son Joseph Junior, with their wives and children now at rest in Pudsey Cemetery.

Another famous name working as publican at the Kings, was William Sutcliffe up until 1898. Willie was a stalwart of Pudsey St Lawrence cricket club and father of 3 sons including legendary Pudsey batsman Herbert Sutcliffe. Sadly Willie met an untimely death from a broken neck during a rugby league game – he too is buried in Pudsey Cemetery. 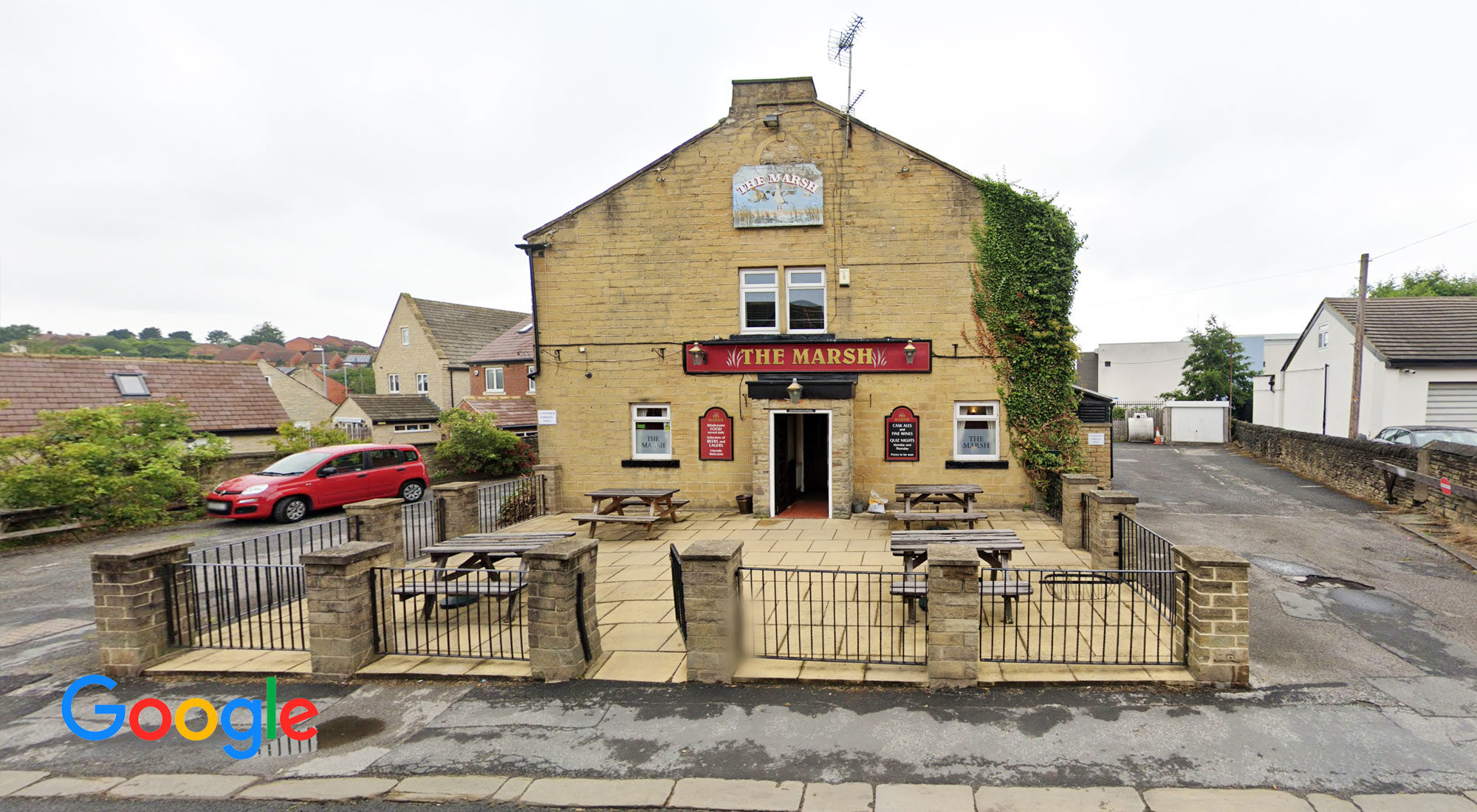 The Marsh pub dates from c1811, it was sited between the quarries of Owlcotes and Uppermoor and benefitted from being close to several mills, and later Middleton Crane works. “The Marsh” as a district was exactly as described, this was the patch of land too wet for farming.  The pub building was originally built as a house by Richard Farrer (a tanner from Lowtown) and soon became a beerhouse.

Two long fields behind the pub were put to use and these became known as The Marsh Fields. During the 1880s The Marsh became known as a centre for sports and charged 6 pence for admittance and towards prize pots. The games included knurl and spell (this looks a bit like golf), arrow throwing, jumping, dog racing and pigeon shooting with prizes of up to £50.

A crowd of up to 600 witnessed one contest where a participant from Bradford was fatally wounded in an accidental shooting, the pigeons also had a bad day.

In 1898 the fields hosted the very first Pudsey Carnival – the parade finished at the pub and was greeted by a “monstrous toss of pigeons”. This was followed by sack races, a five mile bike race, tug of war and a hot air balloon ascent.

Find out more in our final installment

The next part of our series lands in just 2 days, if you want to know more about pubs such as The Oddfellows Arms, The White Horse and more you won’t want to miss it.