As we are looking forward to getting back to places that we enjoyed before the Lockdowns; Im taking a happy pub crawl down memory lane to find the origins of our amazing Pudsey pubs.

For our final entry in the series, we are taking a look at some of the more recent pubs in the Town. Read on to find out!

If you missed part 2, click here to see some of the pubs with the oldest origins. 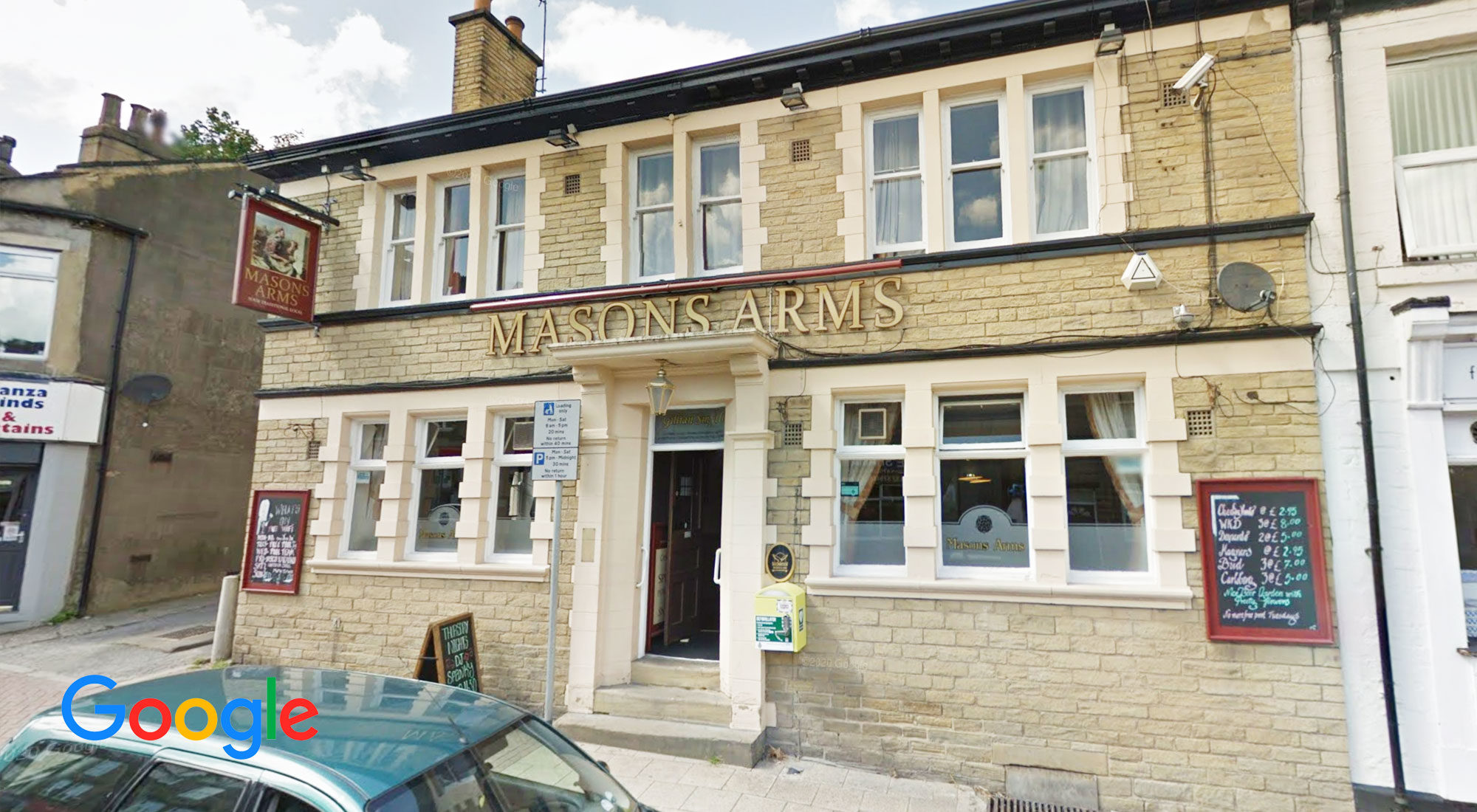 Located in the bustling heart of Lowtown, the Masons Arms dates circa 1771.

It appears to be named due to the numerous quarries in the area and the building boom associated with the onset of the Industrial revolution.

The early Masons was run by the Hinings family, later to take on other Pudsey pubs. Its importance and association with Pudsey textiles was underlined in 1822, when a meeting of 50 local clothiers sent a petition of protest to the Leeds Coloured Cloth Hall insisting that White Hall Clothiers not be admitted to their Leeds establishment.

In 1860 The Masons Arms and attached properties were acquired by Richard Wilson a wine merchant from Bramley. A new inn was built on the site and this building is the present Masons Arms pub. 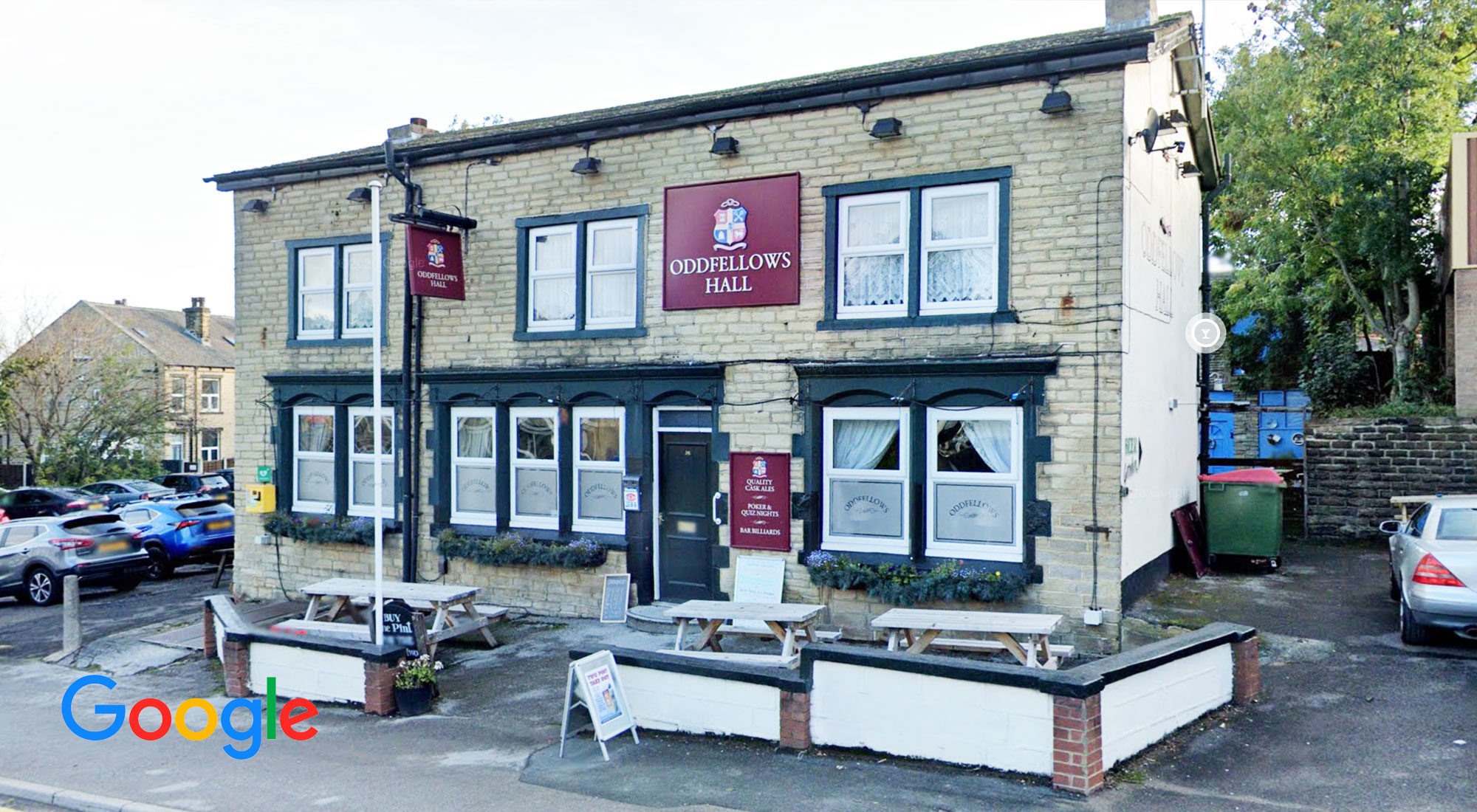 circa 1858, The Oddfellows Hall started life as a fine 3 storeyed building that may have had some textile manufacture associated with it, given its layout.

The township of Stanningley rapidly grew up around it with several foundries, Leigh Mills and the Midland Railway station all close neighbours.

Its name may elude to “The Odd Fellows” one of the earliest and oldest fraternal societies, certainly the pub had its own Lodge room. We do know that the Mutual Benefit Society and Stanningley Homing Pigeon Society along with many other local ornithological groups had a base here.

The Oddfellows was renowned for leaving its back door open for thirsty foundry workers, when the front door was locked outside of licensed hours.

The pubs 3rd floor was removed during the 1960s/70s as were many of the adjoining buildings, and much of historic Stanningley was demolished. 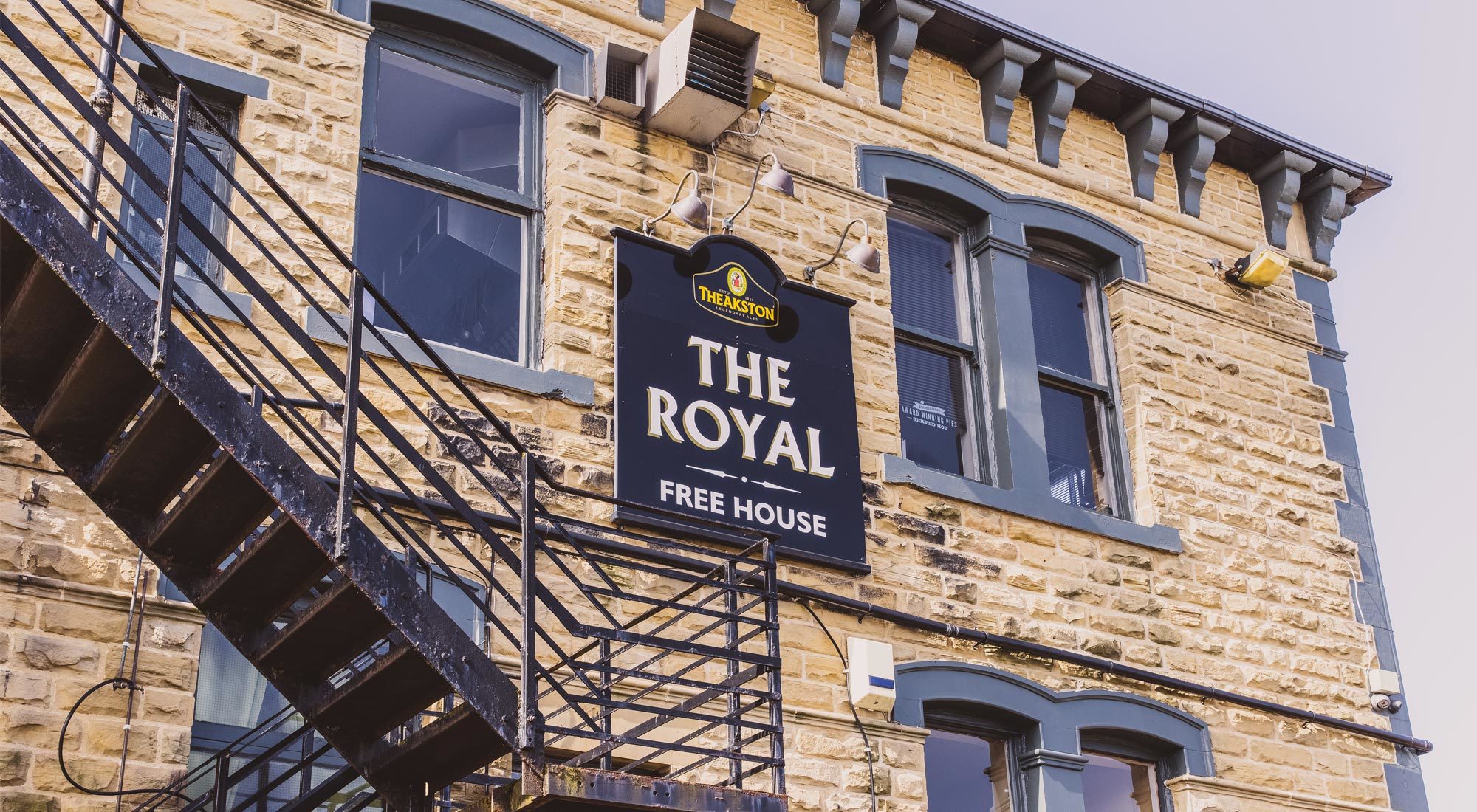 The Royal Hotel was opened in 1878 to coincide with the arrival of the Great Northern Railway to Pudsey Greenside.

Enterprising James Beaumont of Greentop, a farmer and cattle dealer had bought a plot of land near the planned Greenside station (opposite the Carlisle Road entrance). Plans were submitted to build an Inn, although the name “Railway Hotel” was already taken by the earlier pub down at Littlemoor (where a proposed branch line idea had been scrapped).

James chose the prestigious sounding “Royal Hotel” for his pub, it was Pudsey’s first modern pub being built solely for the purpose and included lodging rooms and a spacious meeting room on the top floor. The downstairs was suitably well equipped with two luxurious lounge rooms and two comfortable but functional tap rooms.

Drinkers in one of the lounges could order drinks to table by pressing a bell button on the wall behind each table (these days we use the “Round” app on our phones for the same purpose).

The pub also had two front doors – the main entrance leading to the bar and longes and a corner entrance taking you straight into the front tap room (this is now closed up).

The two tap rooms came in handy as work on the railway tunnel for the “Pudsey loop” started – the Royal had an influx of thirsty navvies to cater for, better heeled customers could keep out of their way in the comfy lounges with their real fires.

The Royal has always catered for live music – the upstairs meeting room doubled as a popular concert hall, and was also a venue for the Pudsey Glee Union and many sports clubs and societies.

During WW2 locals took shelter in the Royals cellar when Pudsey was visited by the Luftwaffe – the pub had a close shave as a delayed action bomb demolished the end row of cottages at the top of Station Street. 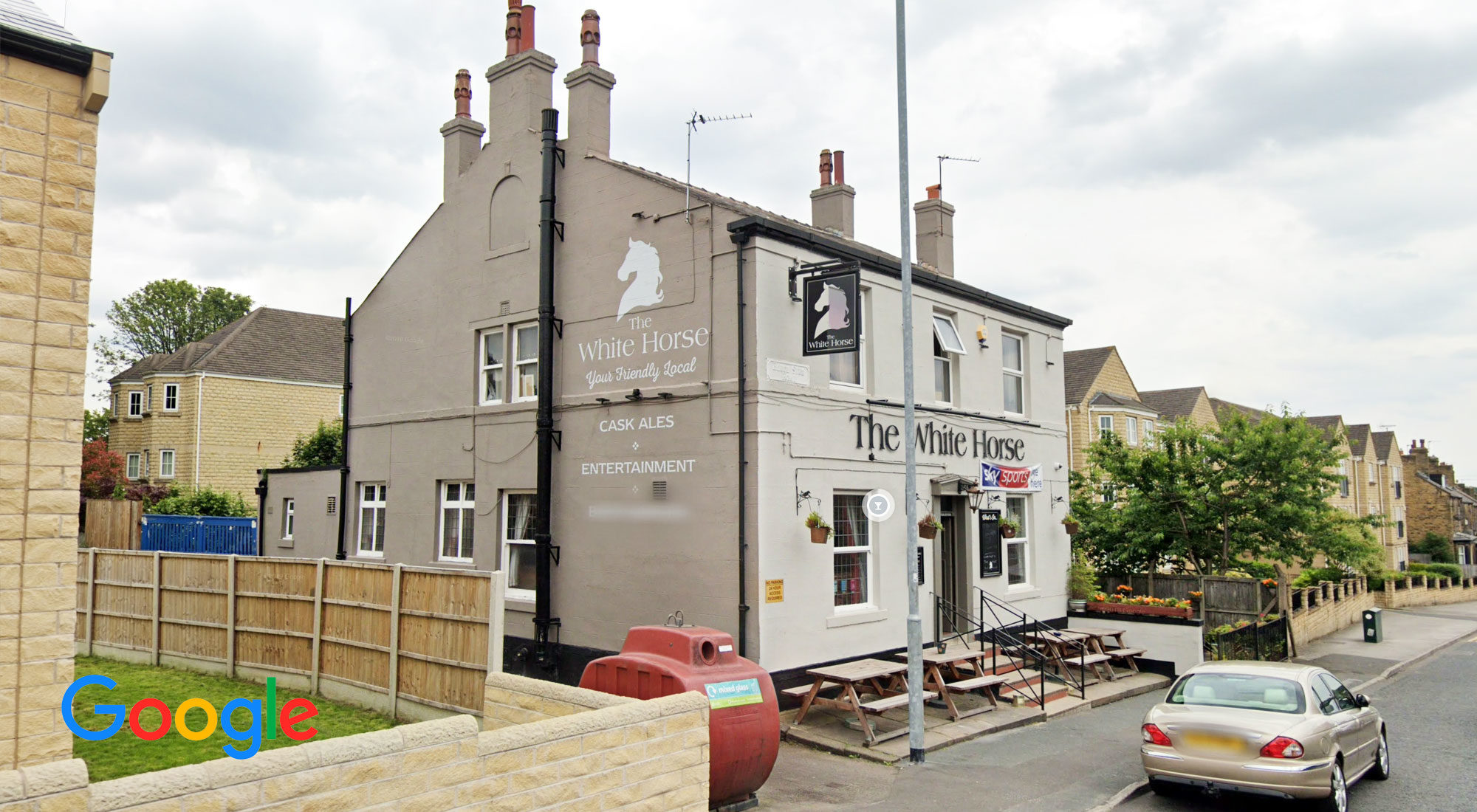 Another Pudsey Pub with origins linked to the Tunnicliffe family; The White Horse aka “The Pony” was built by William Tunnicliffe sometime after 1831. His grandfather was a maltster which probably explains the family interest in brewing – brewing beer in the home was a common practice at the time (as a way of safely purifying water), however some people made a business out if it.

The White Horse had its own micro brewery from the outset. The brewhouse also kept the burling room on the floor above warm for the weavers working in it (central heating and home-brew – what a great work place!).

“The Pony” attracted a lot of revelry, during the Pudsey Feast of 1860 – the Constable was summoned to the pub in the wee hours but was roughed up by the regulars and ejected from the premises!

The pub was acquired by Tetley’s in 1899 after the retirement of Esther Tunnicliffe, the last of her family to run the establishment. 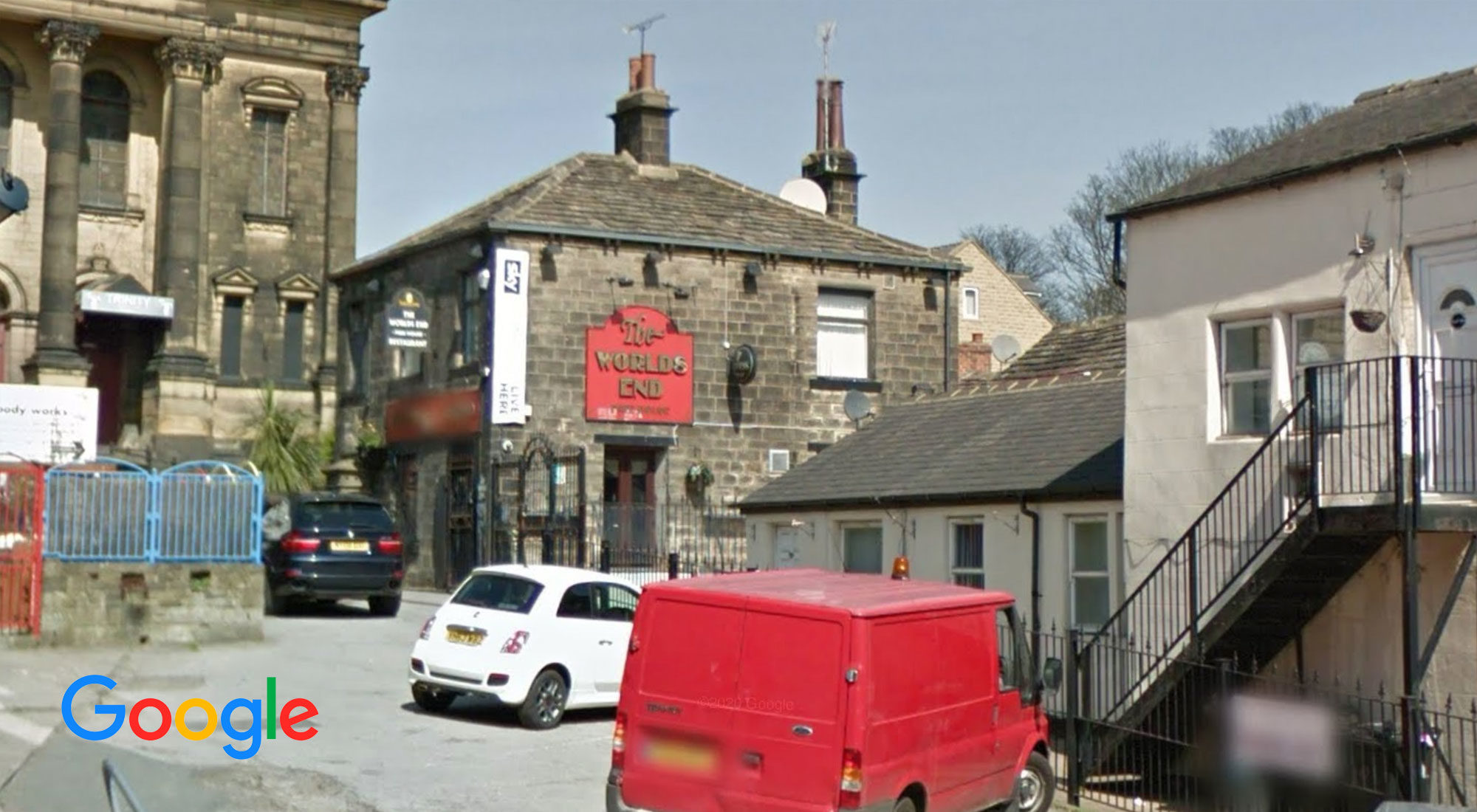 The World’s End was restored as a building and opened as a pub in December 1983.

This was an old clothiers district as was much of historic Lowtown – the site is closely associated with the Methodist Chapel and yard which later became Pudsey Trinity.

It would be interesting to know what the Victorian Temperance movement at the Chapel would have made of a pub opening next door 100 years later on.

Booths Yard itself is a fantastic example of a sympathetic restoration project which has Grade II listed status, many of the old buildings had lay in ruins for generations. The World’s End was opened as the centre piece to the heritage shopping and hospitality area which takes its name from the famous James Booth’s shop on the end of the row.

Initially opening as a stone floored single storey, the World’s soon expanded taking in the upstairs Wesley House, adding an extra bar but keeping the two connected by a gallery.

A popular pub in the town centre, the World’s was also host to folk music legends Aiken’s Drum who  took up a residency in 1986 playing Sunday nights, and this continued until November 2005.

We sincerely hope you enjoyed our 3 part series on the history of Pudsey’s current pubs. However, Pudsey is widely known for the amount of pubs that have graced our Town’s streets over the years. In the next series we’ll take a look at some of the fondly remembered pubs that have been and gone and take you down memory lane.