This year the Royal British Legion celebrated its 100th anniversary.

The British Legion was formed in 1921 when Sir Douglas Haig organised several National and Regional Armed Forces charities to work together towards common goals. This was backed by the famous “Poppy Appeal”, and many original Poppy sellers were injured Veterans and bereaved Widows of WW1.

Each Village, Town and City went on to form their own Branches of the Legion, with 1000s of ex-services and their families and friends becoming members and have been supporting our veterans of all conflicts since. 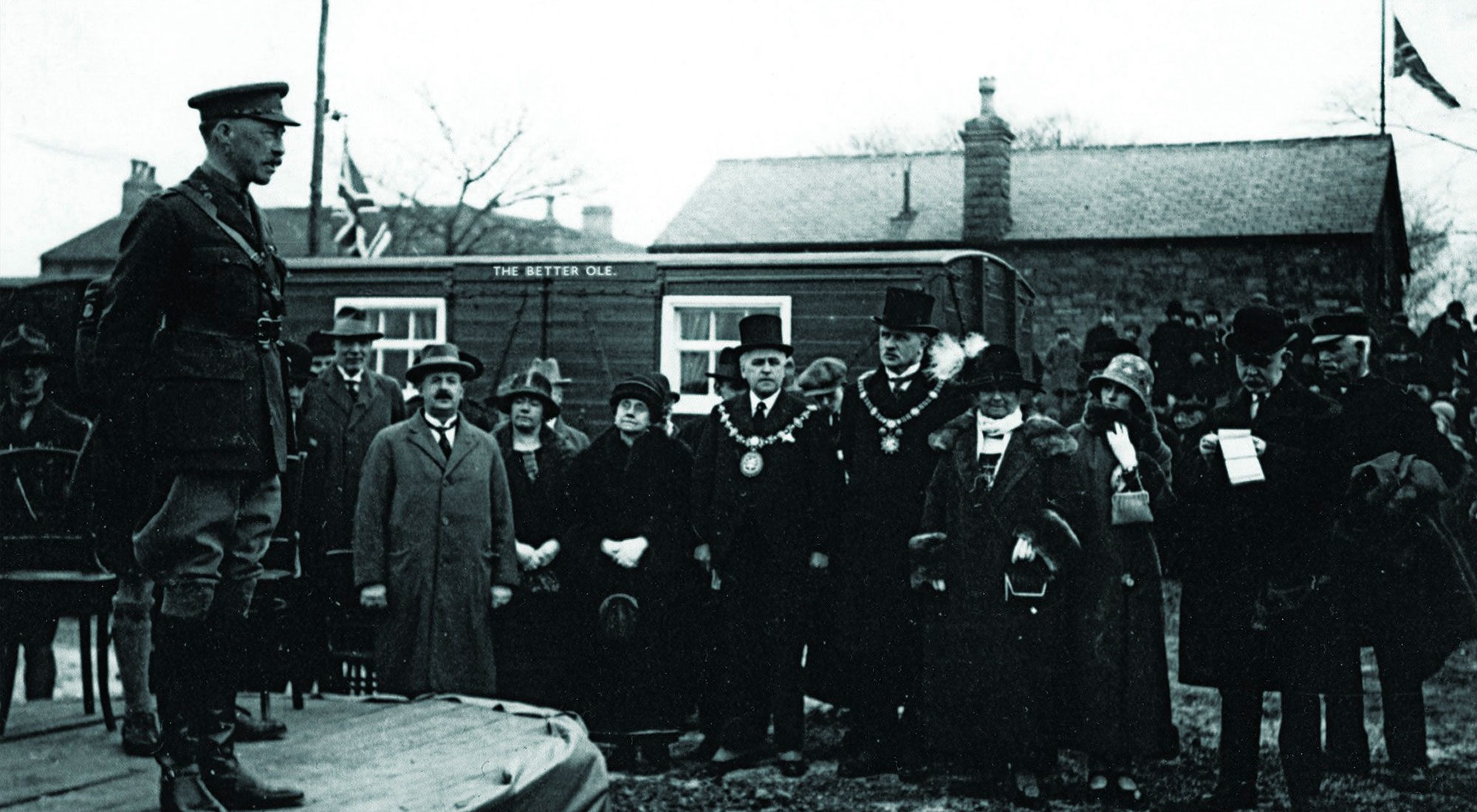 Our Legion Branch in Pudsey dates back to 1927, and started life in a donated railway carriage. It was nicknamed “The Better ‘Ole” in tribute to the Bruce Bairnsfather WW1 cartoon series “Old Bill”. Later the Branch and its Social club would move next door into a converted bus garage on Robin Lane (now the Robin Lane Club).

Straight away the new Pudsey British Legion Branch participated in Armistice Day Parades and supporting the Poppy Appeal, whilst giving camaraderie and community support to all its members.

On 29th May 1971, on its golden anniversary – the British Legion was granted a Royal charter by Queen Elizabeth II, becoming The Royal British Legion. As veteran numbers began to drop dramatically during the 1980s, the Pudsey Branch merged with Farsley’s which sadly folded – the volunteer members at Pudsey Branch now cover the Remembrance services at both Farsley and Pudsey. 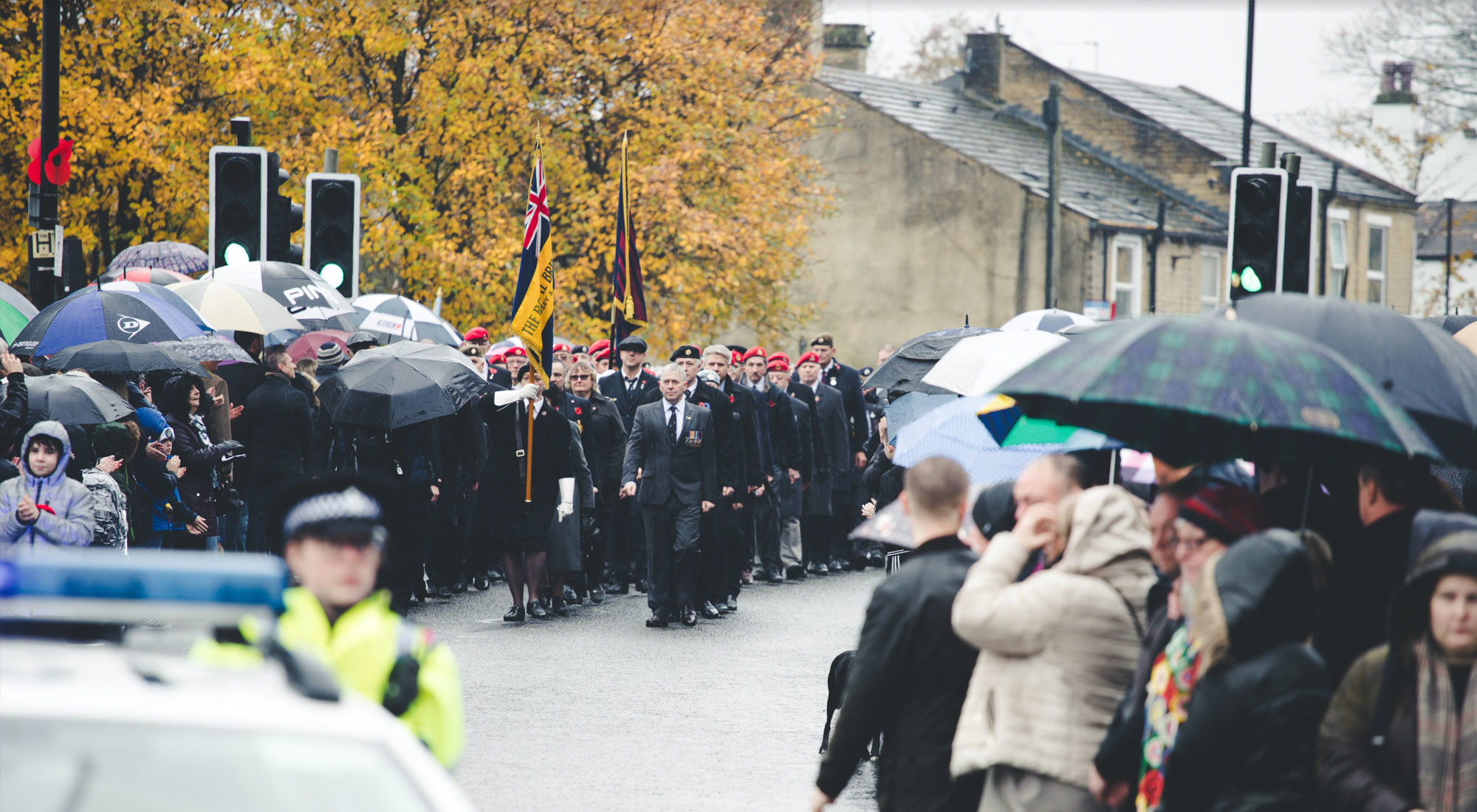 As well as organising the local Poppy Appeal (new volunteers always welcome), the Pudsey & Farsley Branch also organises our Remembrance Parades, anniversary services of remembrance (such as for Lee Rigby), Armed Forces Day with our friends at the Royal Hotel, and go the extra mile to visit and commemorate our fallen on the Western Front. The Branch has had the honour of taking the Last Post at the Menin Gate at Ypres on two occasions.

New members are always welcome! – you don’t have to be ex-forces to get involved. The Branch meets every third Tuesday of the month at The Royal Hotel, Station St from 8pm. 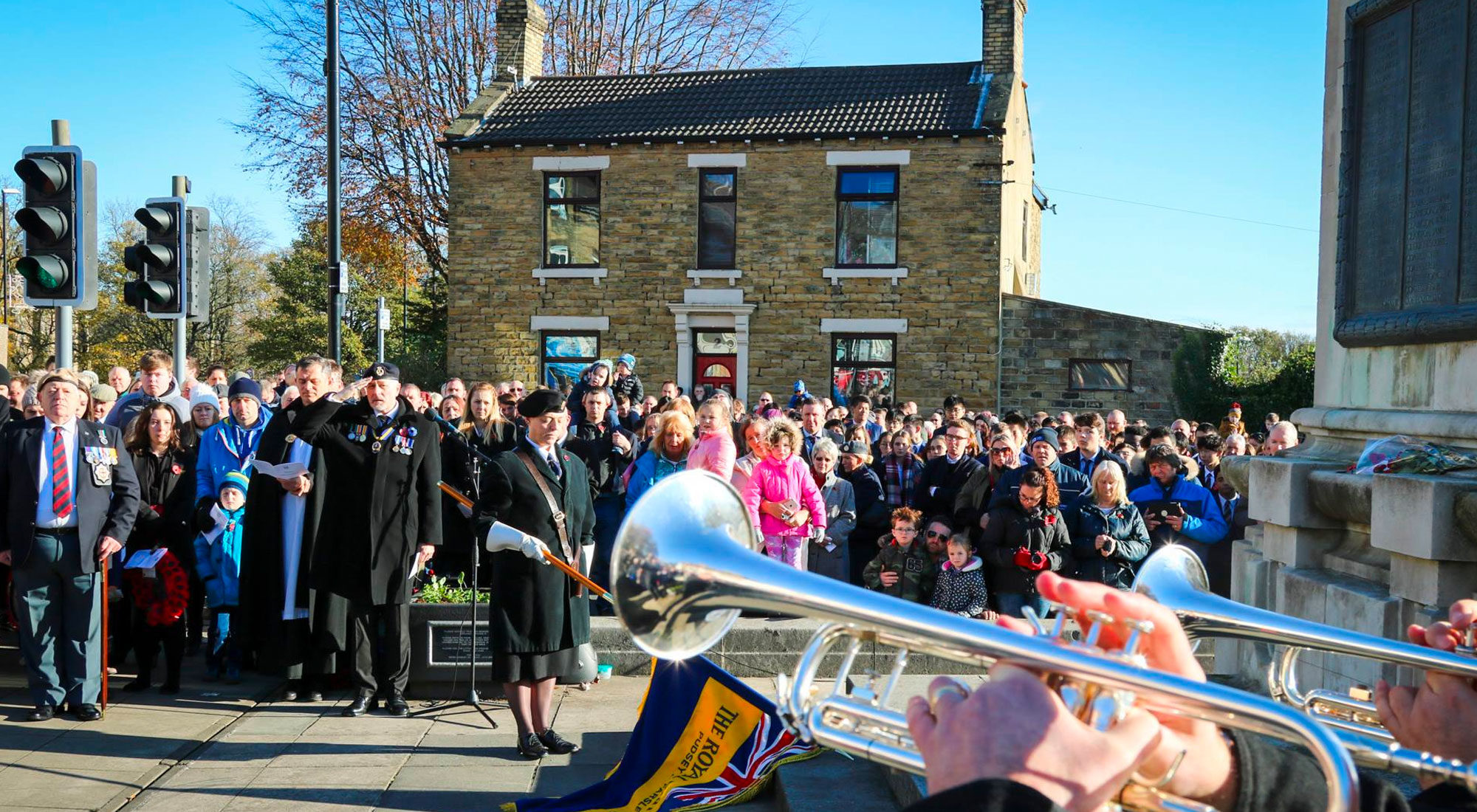 Also getting closer to its Centenary is our magnificent Grade II listed Cenotaph which was unveiled in September 1922.

The Cenotaph was paid for by subscription and donations from the people of Pudsey. The memorial they built is a square pedestal of Portland Stone and supports the bronze figure of a Private soldier of the West Yorkshire Regiment, sculpted by Mr. Henry Poole of London. It was sited on the consecrated grounds of the ancient Chapel of Ease of All Saints (which had been demolished in 1879). The unveiling ceremony was held in front of a massive crowd on the 10th September 1922. 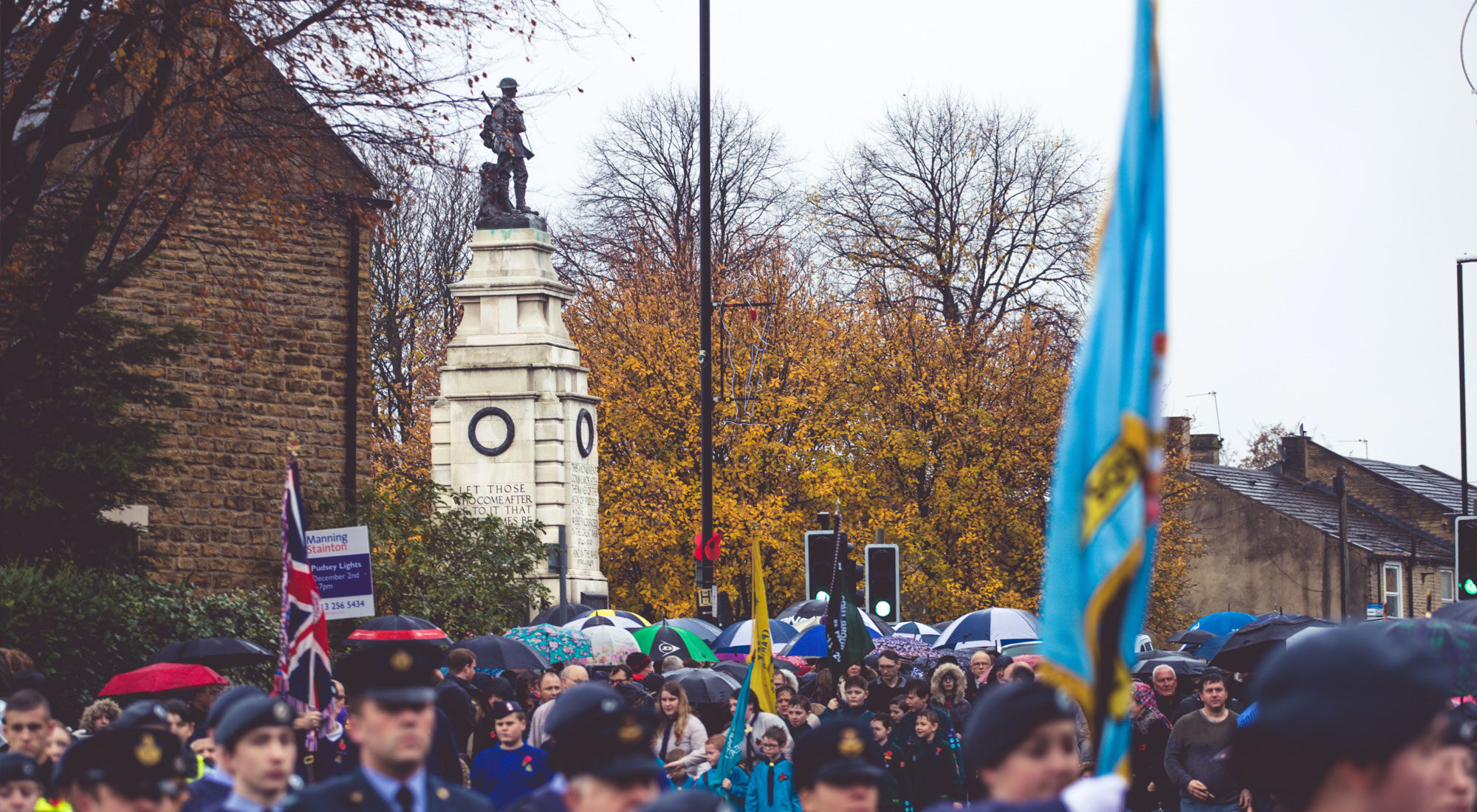 The First Armistice Day service wasn’t until 11th November 1927, presided over by the Rev William Tomlinson Forster – this has been an annual event ever since (the two minute silence at 11am is a mark of respect dating back to 1919).

A Cenotaph – which literally means Empty Tomb in Greek – is a tomb or monument erected to honour a person or group of persons whose remains lie elsewhere. Many of the people commemorated here are at rest in Commonwealth War Grave Commission burial grounds in France and Belgium. Some who were lost completely are remembered on monuments such as the Menin Gate and Thiepval. 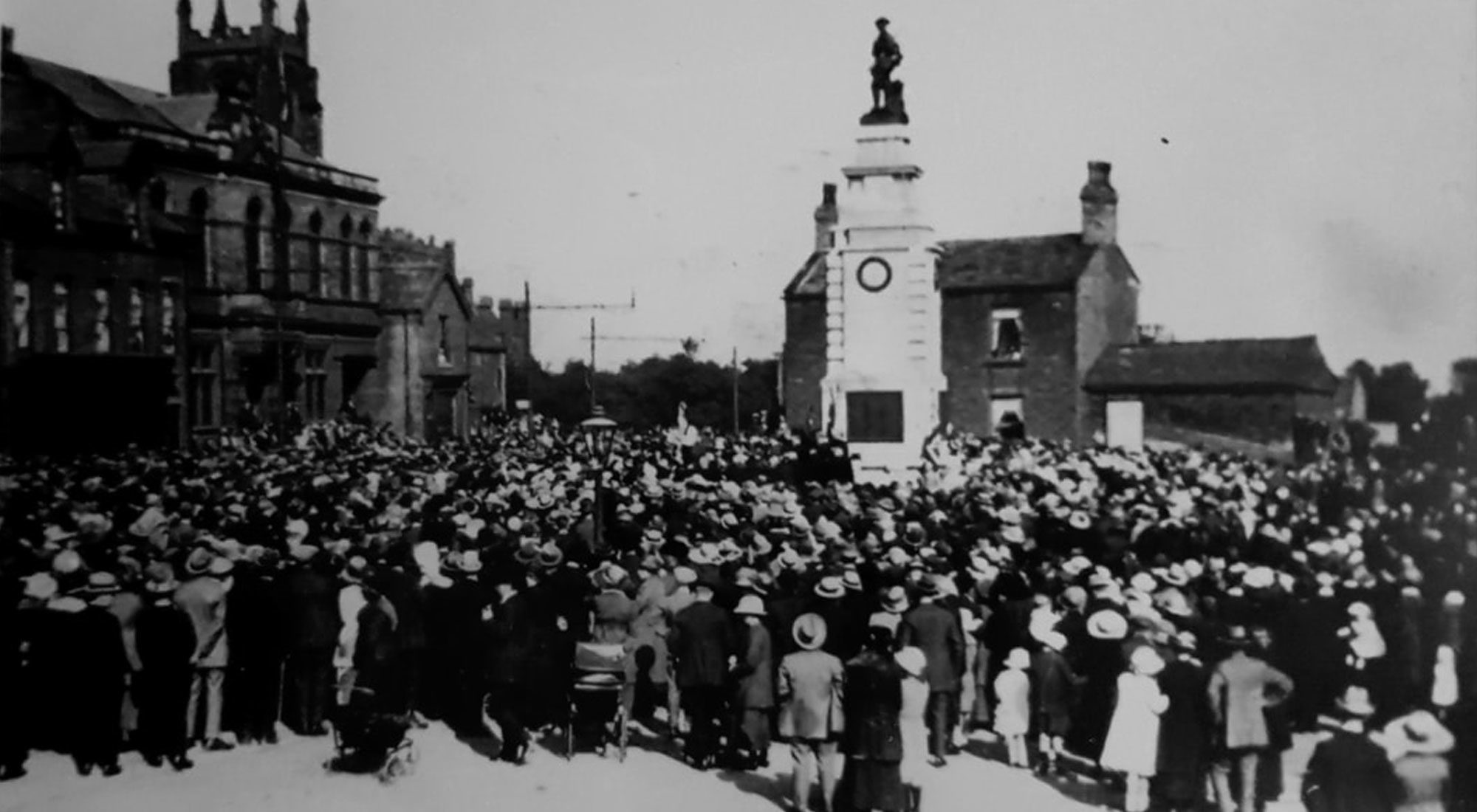 The memorial carries the names of 341 servicemen who died in World War I and 79 servicemen and one servicewoman from the Second World War.

As a listed memorial it has not been possible to add names from more recent conflicts – they are instead remembered at the new Bramley War Memorial (and the National Memorial Arboretum),

However we have a memorial plinth to the Cenotaph missing names, unveiled in 2018; these are sourced from War Graves in Pudsey Cemetery & Memorial Plaques in local institutions and Churches.

They are all now included here to be remembered together, for more information please visit www.pudseycenotaph.co.uk. 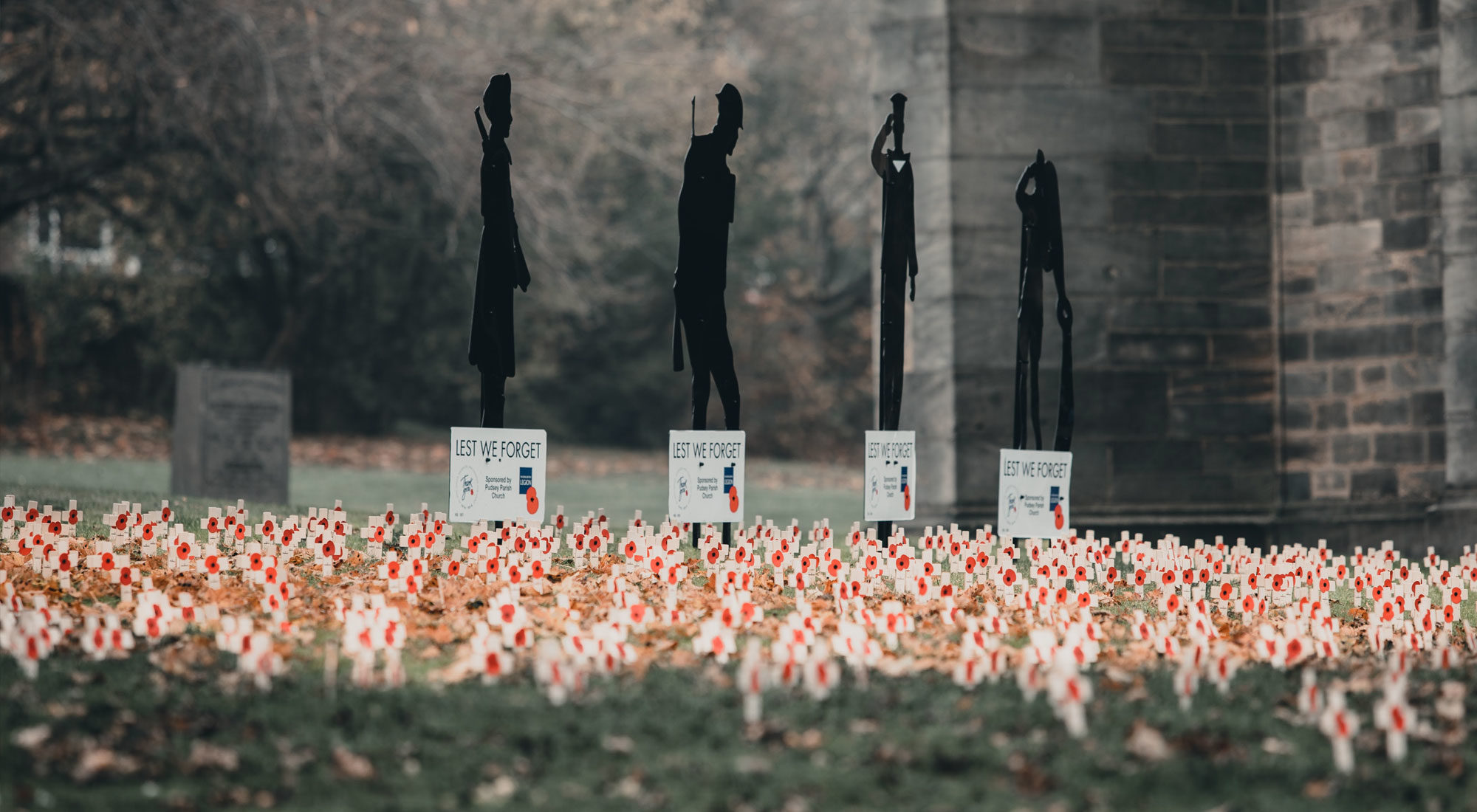 A special note of thanks to The Pudsey Poppy Display, Pudsey in Bloom and Pudsey & Farsley Royal British Legion Branch for their combined upkeep and display work at Pudsey Cenotaph, and also to everyone at Pudsey Parish Church for supporting the services and Fairbank Harding for their PA.

Im also proud to be the Vice Chairman of Pudsey & Farsley Royal British Legion Branch and a volunteer for the Commonwealth War Graves Commission.