Damon’s History – Tales from the Ancient Chapel of Ease

If you came along on one of our Spooky Tours in October, you will have heard me mention a lot about the heritage in Pudsey’s Chapeltown.

Because so much of that heritage is now sadly lost (but, not forgotten) here is a brief explanation of some of the incredible Pudsey history from Chapeltown and its Chapel of Ease. 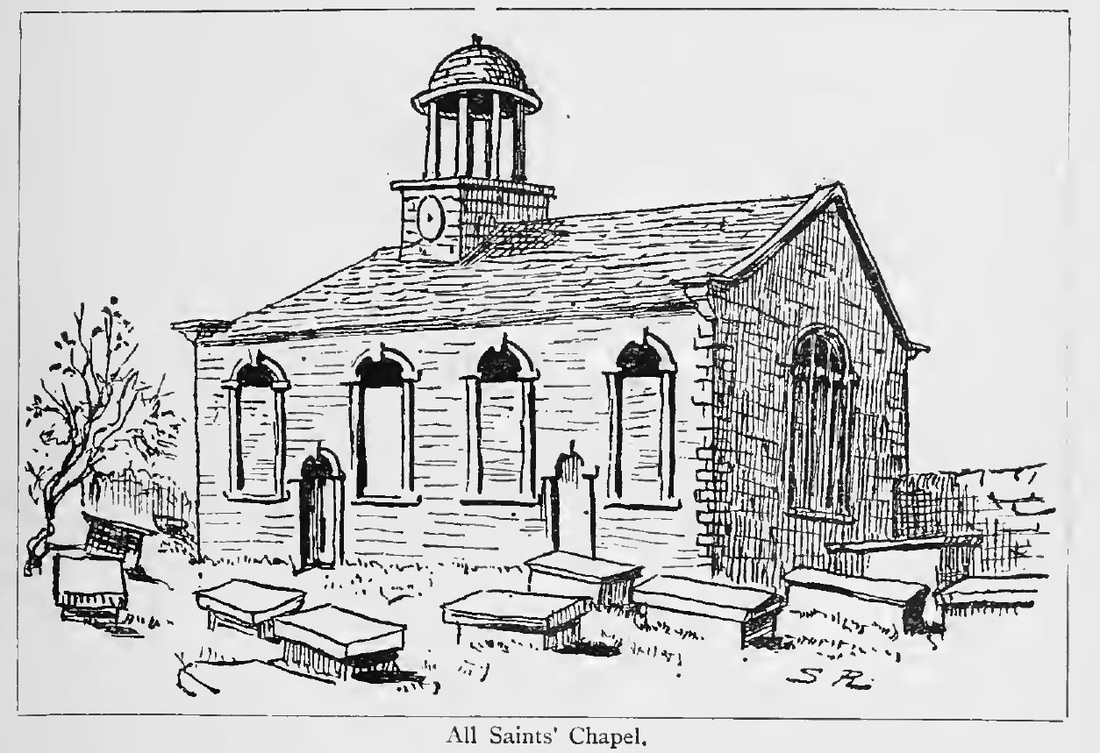 Pudsey started out life as a group of interlinked hamlets – Owlcotes, Waver Green, Crimbles, Greenside etc with Chapel Town at the centre, but didn’t have its own Parish Church. Instead the people were expected to attend Sunday Mass at the Parish Church of St Wilfrids Calverley (est. 1154); that meant a long muddy trek over Owlcotes and down Priesthorpe Lane in all weathers. For those not able to make that journey, a “Chapel of Ease” was erected on the junction of what was to become Chapeltown and Carlisle Road – literally the ‘Easier Chapel to get to’. A similar Chapel was also built at Idle – part of the same Parish at Calverley.

Services could be held at our small purpose built Chapel of All Saints – fulfilling Pudsey folk’s legal obligation to attend Church on a Sunday. The spot where the Chapel was built in the Middle Ages (its foundations are still under the Cenotaph), lent the area the name “Chapeltown”.  The new Chapelry was a “perpetual curacy”, under the administration of and not replacing the authority of the Vicar at Calverley Parish.

The Chapel had its own crypt, later a consecrated burial ground, and importantly its own Priest who preached to the early residents of Pudsey. Records suggest a part time Minister may have been active on this site during the 14th to 16th Centuries, and certainly predates Henry VIII’s Reformation (1534).

The Chapel building itself was quite small, low and squat, with two doorways and a bell tower. Inside was furnished with wooden box pews which were rented out; the prime spots were coveted by the leading families in Pudsey. Eventually an upstairs gallery was added for more seating, but because the Chapel was so small this only left 4 feet of space for the pews underneath!

A fine existing examples of this style of architecture can be found locally at the Puritan Chapel of Bramhope, and also the Chapel of Ease at Idle.

The first full time Minister pof the Chapel was born in Idle, the Reverend Elkanah Wales.

He was appointed in 1615 and was assisted by Church Wardens that roamed the town looking for people trying to avoid the Sunday Sermon. These Wardens were known as “Dog Whippers”. They drove stray dogs out of the Chapel yard and kept order amongst the pews with long rods; giving those nodding off a firm tap on the back of the head. This was the age of Puritanism and church worship was not only mandatory but also very thorough. 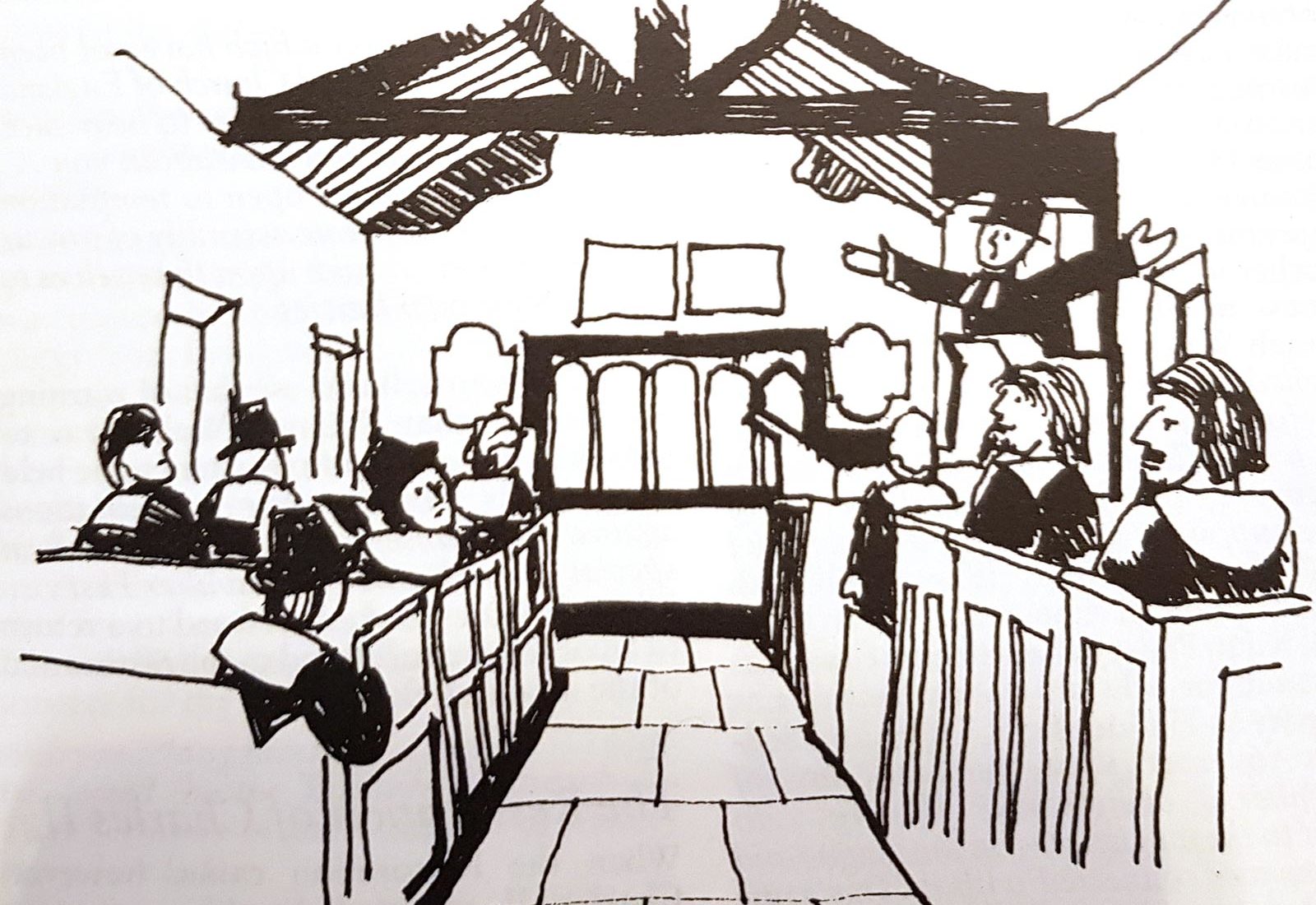 Above: A typical Sunday Sermon with Elkanah Wales

The Minister began at 9am with prayer for quarter of an hour imploring a blessing on the work of the day. Followed by reading and expounding a chapter or psalm, prayed one hour, preached another, and concluded with a half hour long prayer. At half time break he retired for 15 minutes for a little refreshment whilst the congregation sang. The latter part of the service was much the same, with two and a half hours in prayer and preaching. He dismissed the people at about Four in the afternoon.  I can hear your eyes glazing over at the thought of all that, but remember the Dog Whippers – there was no chance of avoiding it!

At the start of his mission, Elkanah gained a reputation as a fine orator and an excellent Puritan Minister, but his own people in Pudsey were noted to be a stubborn flock: “For the most part continued ignorant and intractable, and heard him with indifference or scarcely at all”. However the fame of Pudsey’s Minister and its tiny chapel spread far and wide and many notable people came to visit on a spiritual pilgrimage.

Elkanah married a local lass named Anne Parker, the service conducted at Calverley St wilfrids, and they would remain together for 44 years. They also adopted Elkanah’s four younger brothers after they were orphaned.

The English Civil War was a strange time to be a commoner in our district – Leeds and Bradford were captured in fast moving battles by Lord Thomas Fairfax’s Roundhead Army, yet Yorkshire remained predominantly Royalist. Most people supported the Parliamentarian stance, but had to be cautious around their vehemently Royalist Landlords (as tenant farmers they could not afford to fall foul of the people they rented their fields from). 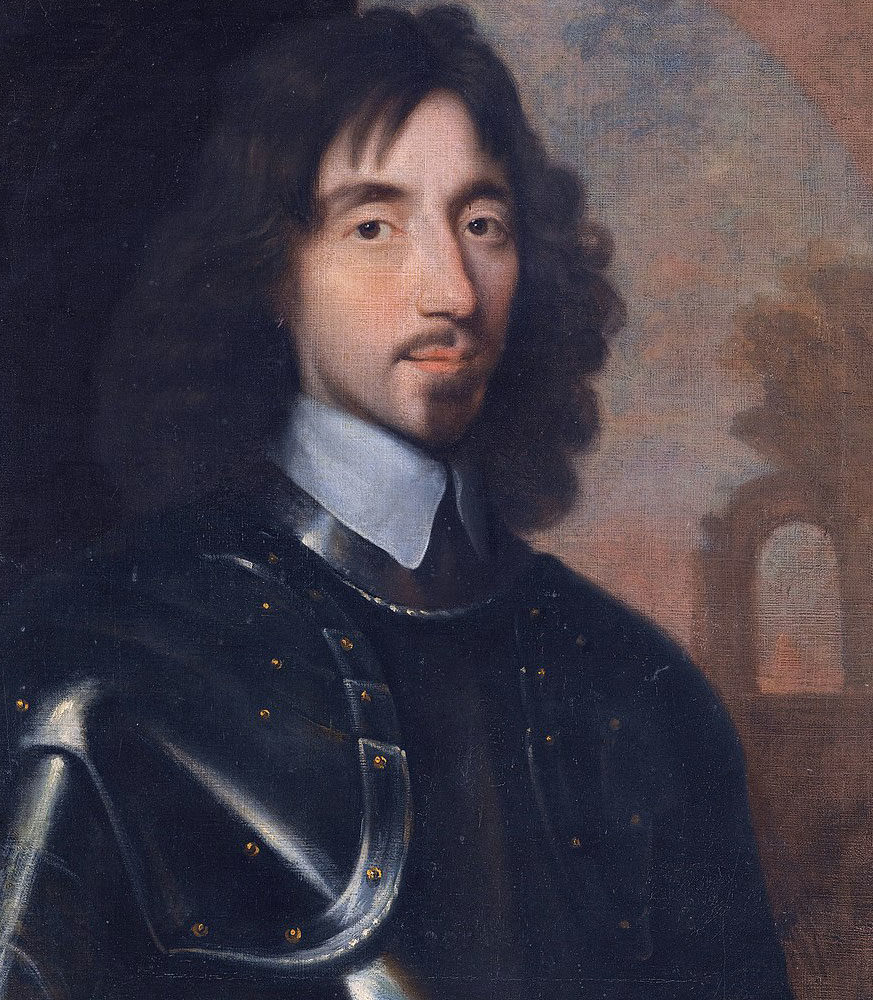 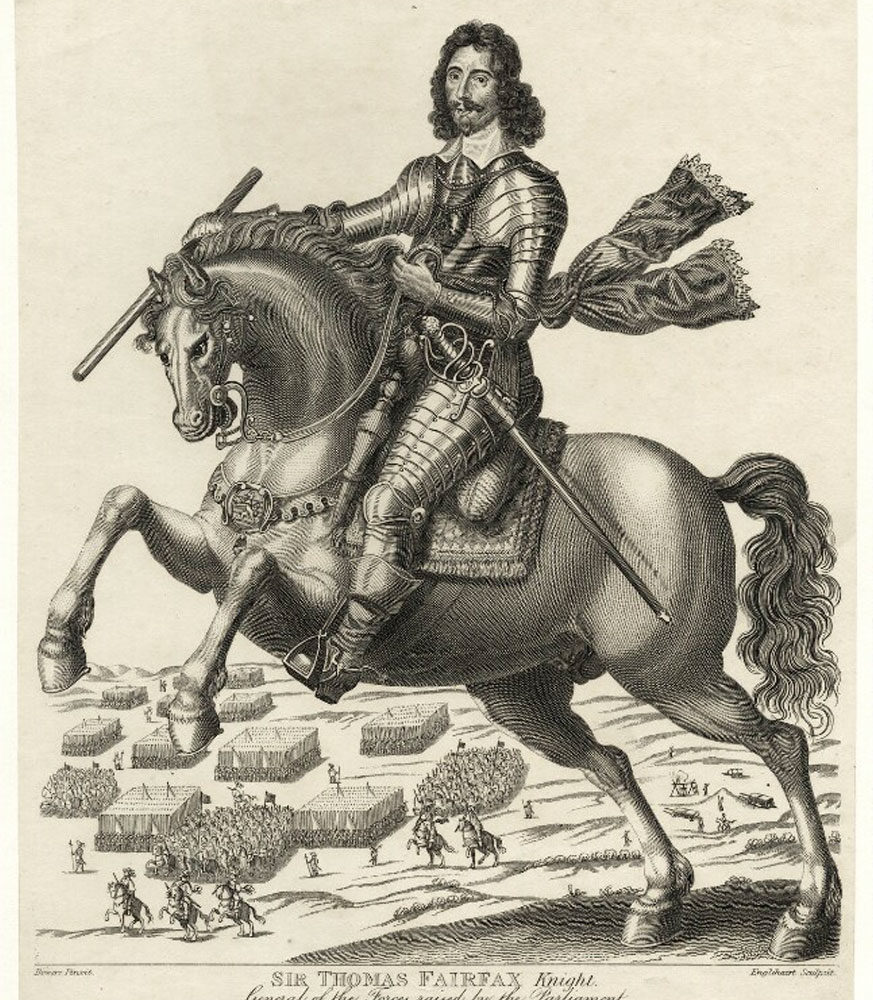 In an attempt to stir up this local support and recruit troops, Lord Thomas Fairfax (Oliver Cromwell’s Commander in Chief) toured the woollen towns of West Yorkshire, finding strong backing from Halifax and Bradford. When Fairfax arrived in Pudsey he set up a small garrison at Uppermoor and visited Elkanah Wales, by now one of the most renowned Puritan Ministers in the North, in the hope of gaining his influential support. The two men quickly became firm friends, sharing a vision of a future dedicated to freedom for both the Church and State. Elkanah Wales was sympathetic to Fairfax’s mission, but refused to endorse the bloody conflict that had taken hold of the Country. Fairfax became one of many to offer Wales a position with a generous wage, but the Minister always refused these proposals to leave Pudsey. 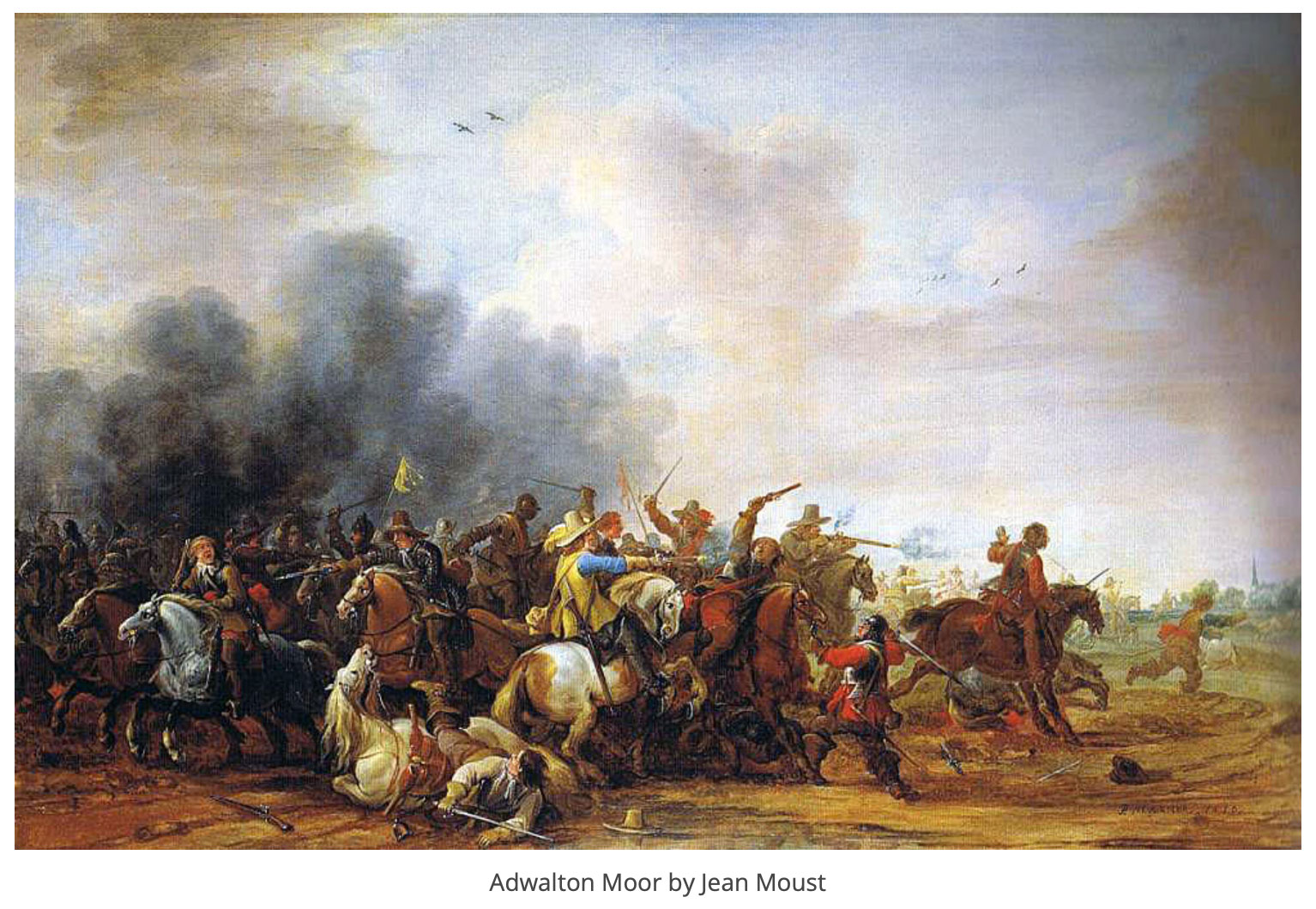 30th June 1643 saw Fairfax and his Army attempting to ambush Lord Newcastle’s Royalists, but found them waiting and ready on Adwalton Moor near Drighlington. Only 3 and a half miles away, the musket volleys and cannon fire between the Royalists and Roundheads would have echoed off the walls of the old Chapel of Ease. The details of this close fought battle which Fairfax loses, I will leave to a later blog.

Most historians dismiss it as a mere skirmish. However the loss at Adwalton Moor fundamentally shifted the balance of the Civil War by bringing the Scottish Presbyterian Army onto the side of Fairfax and Cromwell; the Royalists and their supporters were doomed from then onwards*.

After the war, the Calverley family; Royalists and landlords to Pudsey were levied huge fines, which eventually led to the break up of the Manor and Pudsey being sold off to the Presbyterian Milner family.

A report is delivered in the Chapel to local magistrates from officials across the North on the latest outbreak of Bubonic Plague. Cases in Pudsey resulted in 29 deaths that year out of a population of 500.

The Battle of Naseby took place on 14 June 1645. The Parliamentarian New Model Army, commanded by Sir Thomas Fairfax and Oliver Cromwell, destroyed the main Royalist army under Charles I and Prince Rupert.

As life started to return to normal, Elkanah and Anne built a Parsonage during 1647 opposite to what is now Greenside School. This building survived until the site was redeveloped in the 1920’s (stonework from the Parsonage was re-used in outbuildings in Pudsey Park).  Next door to the Parsonage was a Havercake bakery, the baking stone is still in the cellar today. 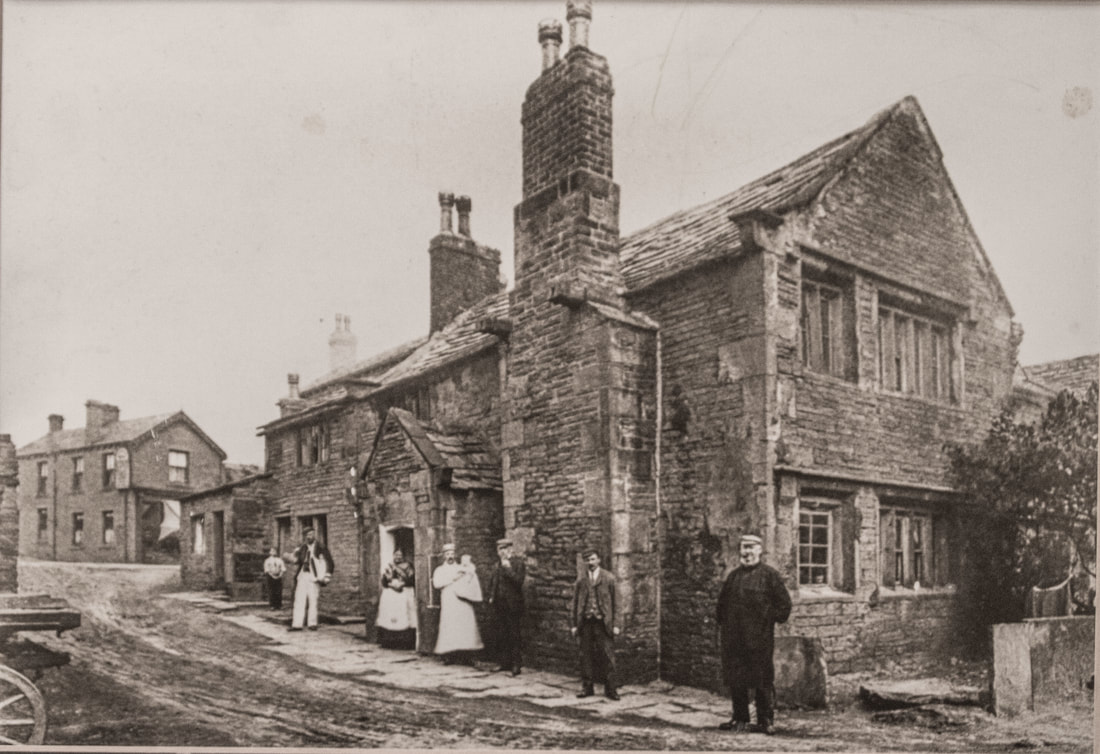 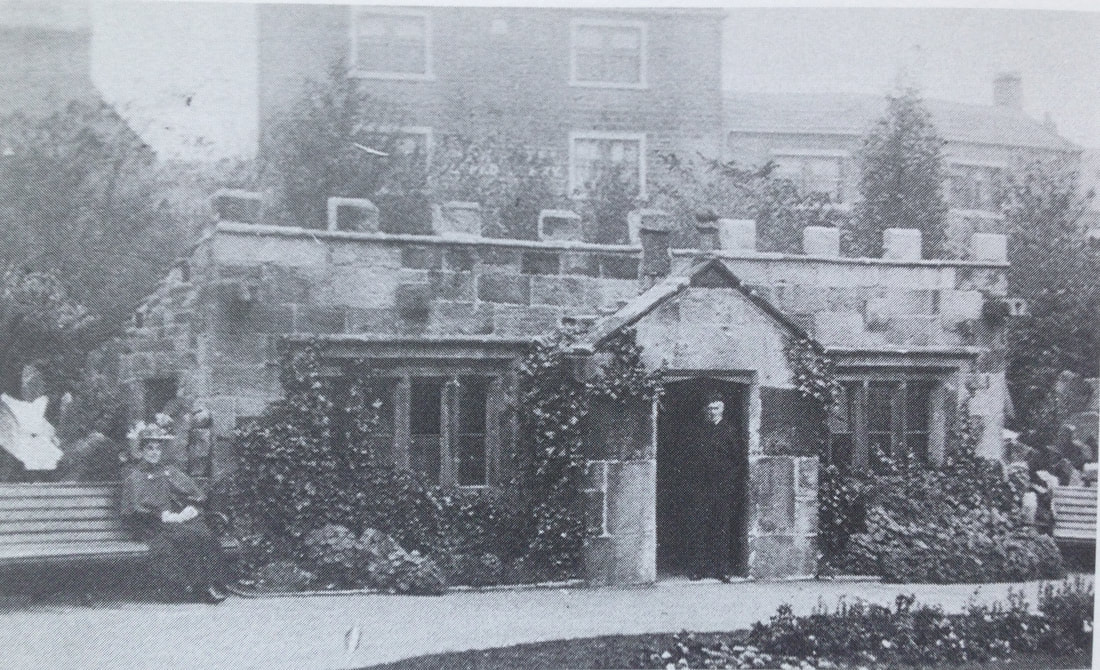 The year Christmas was cancelled – see our next months blog! Incidentally this also kicks off the second half of the English Civil War.

Anne Wales passed away on May 16th, 1660. She was laid to rest inside the old Chapel crypt, under a tombstone dedicated to her. This tombstone is now placed outside Pudsey St. Lawrence Parish Church doorway, being moved from its original position in Chapeltown during the 1921 construction of the Cenotaph.

Elkanah continued to labour in his preaching to enraptured congregations, but the tide was turning back towards a less Protestant version of Christianity. The Bartholomew Act caused the Great Ejection of 1662 when 2000 priests were asked to leave the Church of England for refusing to change from Puritan doctrine. Elkanah also rejected the change and found himself locked out of the Chapel he had worked in for 47 years. He preached privately and taught from house to house around Greentop, this work helping to form the strong basis of the non-conformist Congregational movement in Pudsey.

To make life even harder the Five Mile Act came into force, to keep ejected priests well away from their old congregations. As Wales was finally forced to leave his beloved people it is reported that he said;  “O Pudsey, Pudsey, thou that killest the prophets, and stonest them which are sent unto thee, how often would I have gathered thy children together, even as a hen gathereth her chickens under her wings, and ye would not!” He moved down into Leeds outside the 5-mile exclusion zone, though he would still return to Pudsey in secret.

Elkanah Wales died at Mr Hickson’s at Leeds May 11th, 1669 aged 80​ and is reputed to be buried in St John’s Church in Leeds City Centre. He proved that the “fleece was nothing to him; the flock everything” and his motto was; ‘Less than the least of all saints.’

The records start for official burials in the Chapel grounds, as funeral processions had become too dangerous on the roads down to St. Wilfrid’s at Calverley. Recorded burials had been in the Chapel crypt until a consecrated graveyard was created on 3 sides around the Chapel.

After the building of the Church of St. Lawrence in 1824 as the new Parish centre of Pudsey, the All Saints Chapel fell into disuse.

The characterful old Chapel was secretly demolished early one morning in 1879 by the Pudsey Board of Health (the workmen bribed with 196 pints of beer) causing local uproar. The graves in the old chapel yard were later relocated to the Parish churchyard. Afterward the remaining graveyard was used as a rubbish tip until the newly formed Pudsey Borough Council enclosed it with a wall and created a new clean public space. And it was this site that was chosen for the new War Memorial in 1919. 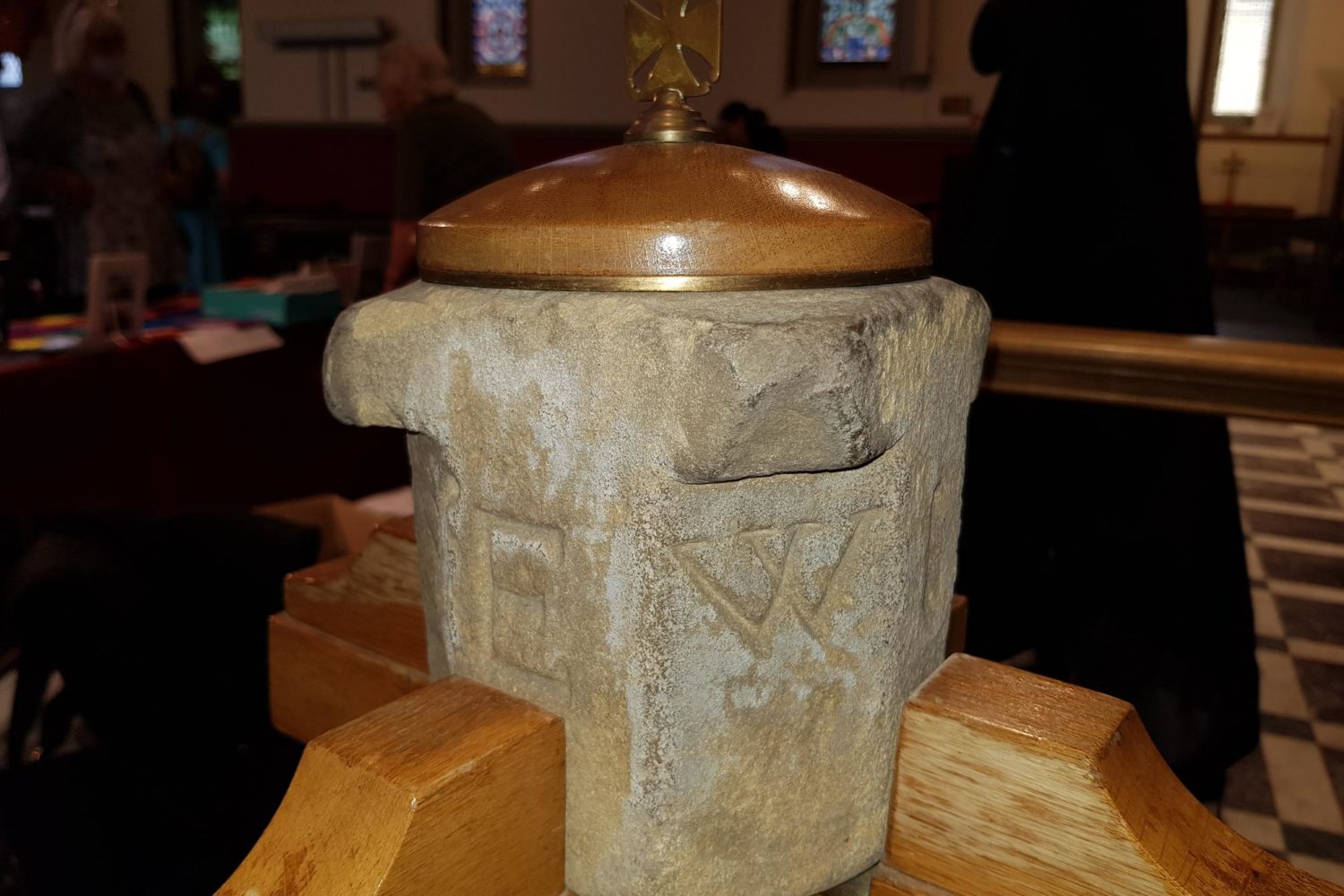 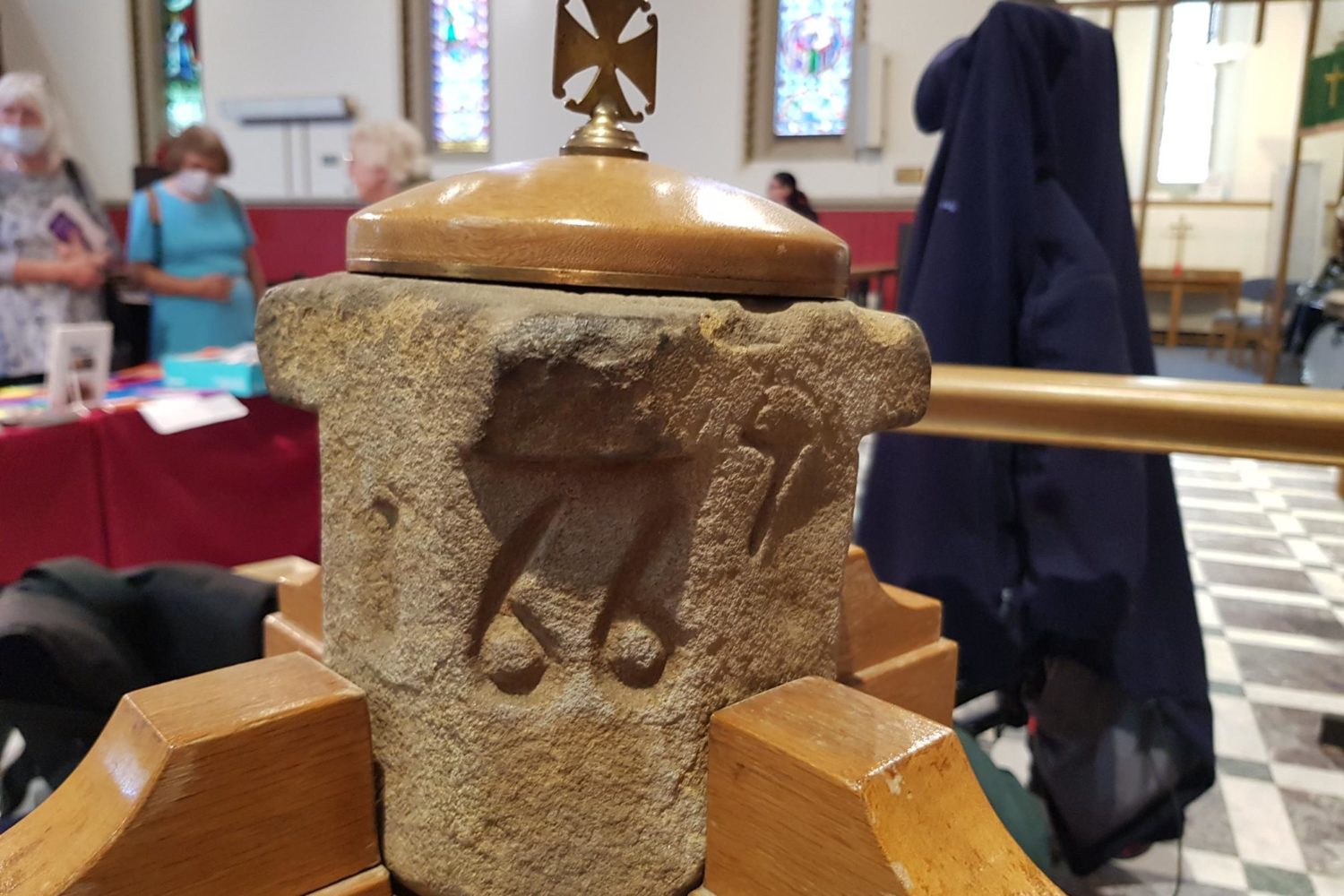 Relics of the Old Chapel: