The story of the Pudsey buses starts at the close of the Victorian era and terminates with the merger of local operators into the Leeds Corporation transport network in 1968. During the golden era of the 1930s you could catch a local bus to anywhere in town, take a tram from Uppermoor that could connect you to Leeds and Bradford via Stanningley, or catch a train from one of our three stations. Amazing. 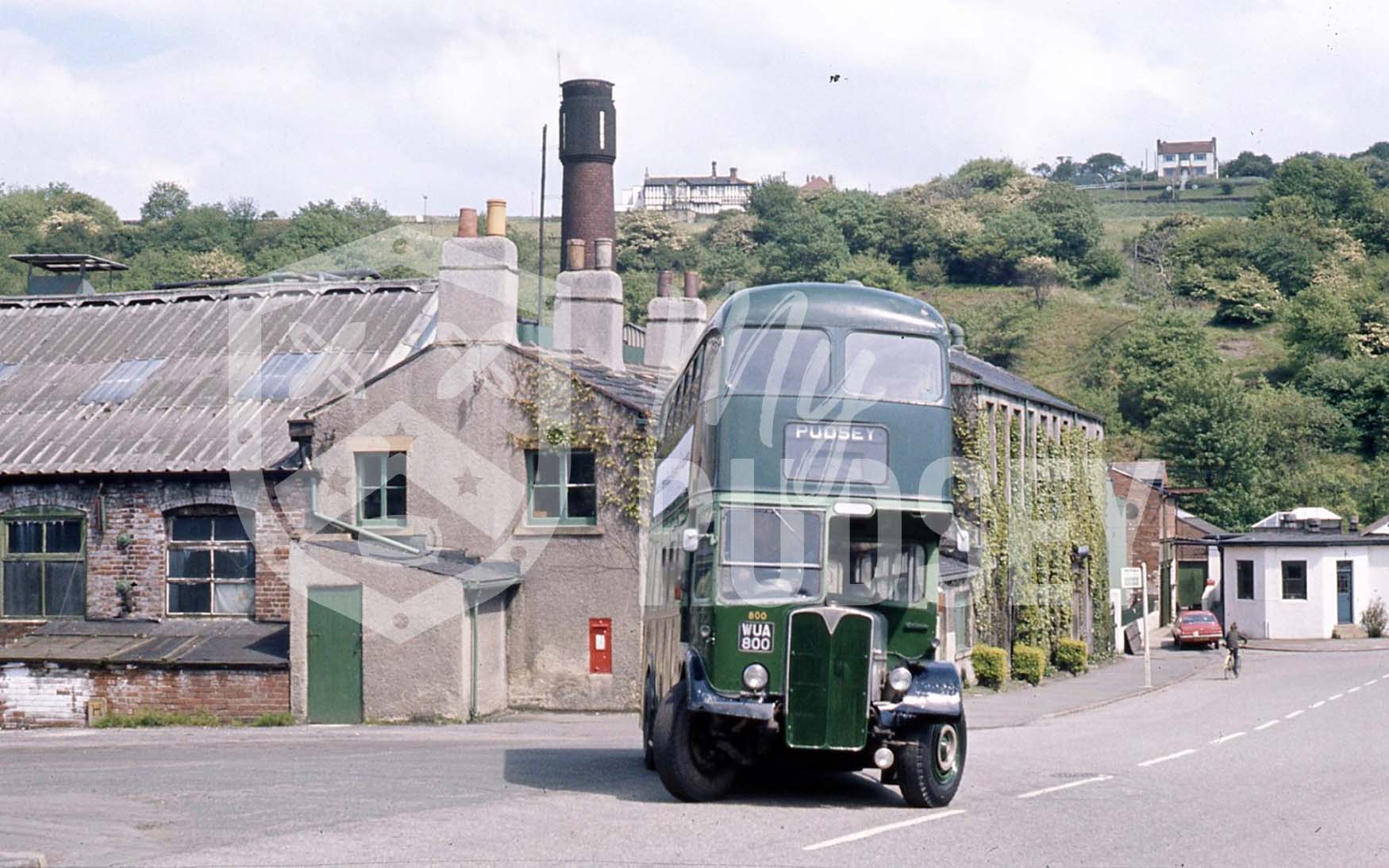 The first bus/public transportation operator based solely in Pudsey was Harry Lister. During 1890 Harry had diversified into horse drawn Hansom cabs and wagonettes. He was based at Victoria House (which later became Victoria Garage, Waterloo, also thus lending its name to Victoria Road), with motorisation a petrol station was added to the garage. It was motorisation that literally kick started a revolution and Harry switched to operating the early single deck buses and coaches that could fill in on routes not covered by the trams (which was most places).

There was a high demand amongst the local mills for day trips and longer excursions out to the seaside, the train services were good but the coaches were simpler and more flexible to use. By 1933 Harry Listers had a license to run regular coach services to Southport amongst others and the operators licenses were highly coveted by other local coach businesses. To cater to demand there was a Listers booking office at Pudsey Market place (the old one) were you could buy a ticket or plan an excursion.

After 44 years of service, Harry Lister & Sons called it a day in 1934. Their four motor coaches were sold to J.W.Kitchin and the prized licences were sold separately to Aspinall’s, Kitchin’s and Barris (later Wallace Arnolds). 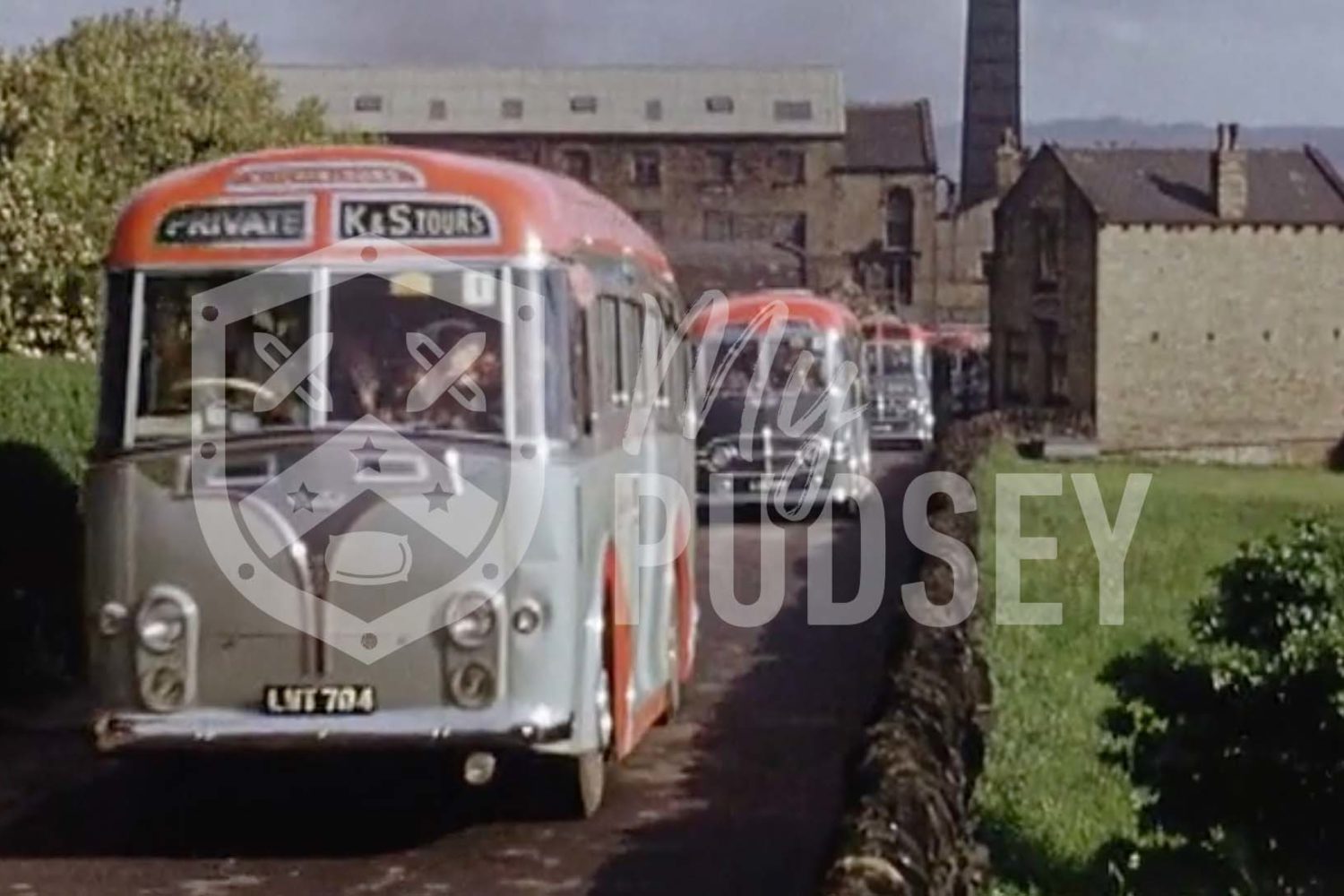 The new build Waterloo estate needed a bus route to connect it up to the rest of the town. A license was granted in 1926 by the Borough Council to James William Kitchin and his three sons Cyril, Harry and Edwin to operate a single route through Pudsey.

Eventually their fleet of vehicles expanded to 23 coaches as well as the regular Pudsey bus service. Their buses and coaches operated in a smart and distinctive red and white livery, later amended to red and grey/silver.

The coach business was the first to offer an express service to Great Yarmouth and Torquay, as well as popular connections to Blackpool and Morecambe for many of the local Mills summer outings.

Despite their success, Kitchin’s had a well deserved reputation for putting their passengers first – most were regulars catching their bus to work and the drivers would always sit and wait at a stop if someone was a bit late…

Initially based at the top of The Marsh, Kitchin’s commissioned the Cavendish bus garage on Richardshaw Lane (now the Climbing Depot) and was their home until they were bought out by Samuel Ledgard’s (more about them in a minute).

Ledgards also took on the solitary bus route of Troydale to Calverley and the four service buses, as well as the Cavendish bus garage, the coach fleet was sold on to Wallace Arnolds. 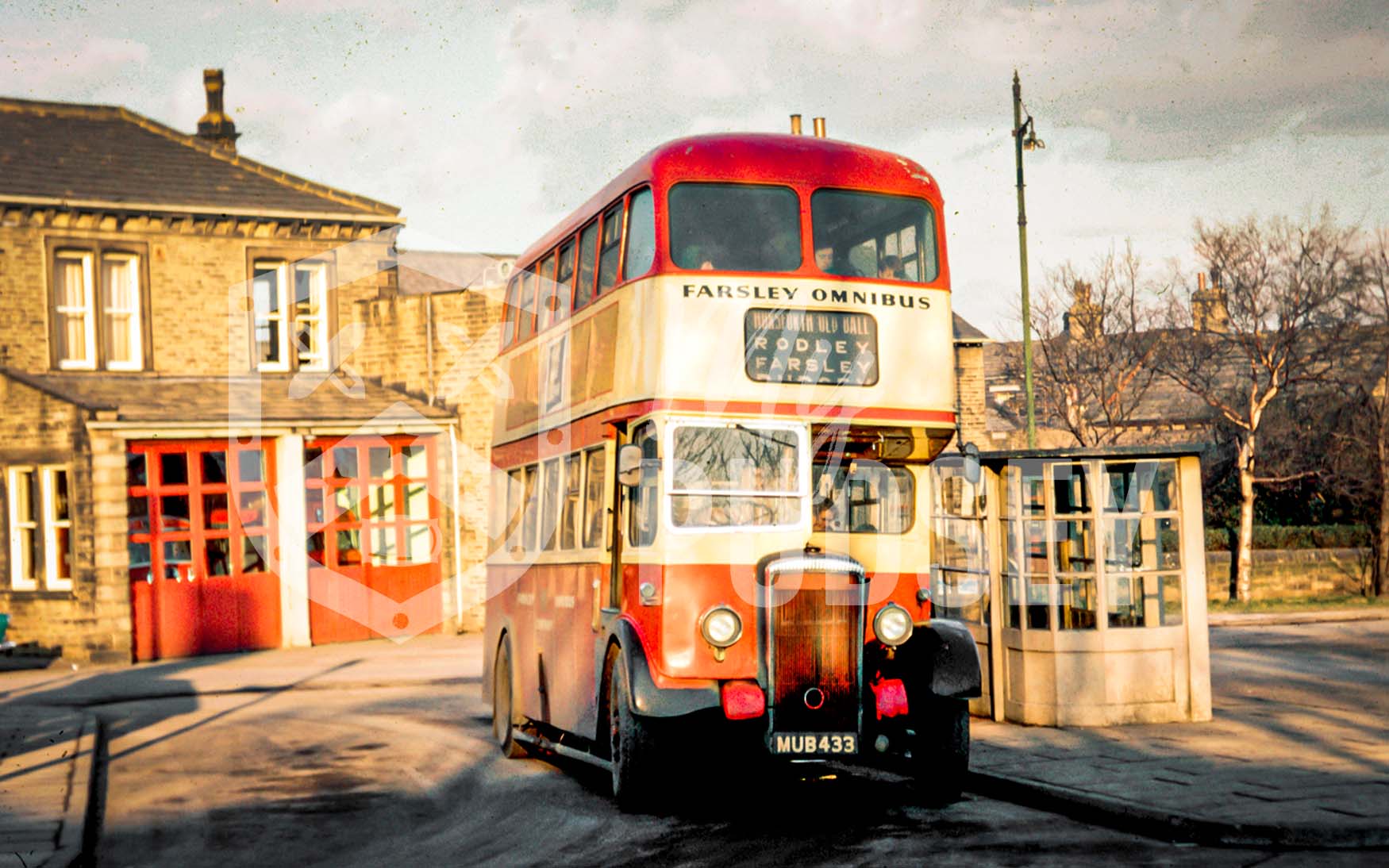 Whilst Listers and Kitchin’s were getting established in the 1920s, another local firm was set up in Stanningley in the early 20’s in the ownership of Mr. Lawson.

The Farsley Omnibus was based at a garage in Town Street, Stanningley opposite the Old Fleece Hotel, and ran with a livery of red and cream. The original route was operated between Stanningley and Rodley, via Farsley. It was shortly after purchased by Maurice Greenwood, who was to control the business for the next thirty years, and earned the nickname “the Farsley Flyers”.

In the mid-1930’s an application was made to extend the original service at both ends, from Rodley through Farsley as far as Horsforth, and from Stanningley through to Pudsey with restricted carriage of passengers. In 1939, the restrictions were removed as an emergency measure and never re-imposed in peacetime, so that unrestricted carriage of passengers was ultimately allowed.

On October 1st 1952 the business was sold to Wallace Arnold Ltd., of Leeds. The Company continued to be operated as a subsidiary and the red and cream livery was retained. In May 1954 the first double-deck vehicle arrived which came via another Wallace Arnold subsidiary, Hardwicks of Scarborough, it was also common to see Kippax buses interchanged with the Farsley fleet and running via the market place in Pudsey.

Eventually the Farsley fleet was housed at the existing Wallace Arnold garage on Richardshaw Lane/Thorpe Road (not to be confused with the Cavendish garage run by Kitchin’s and Ledgards). 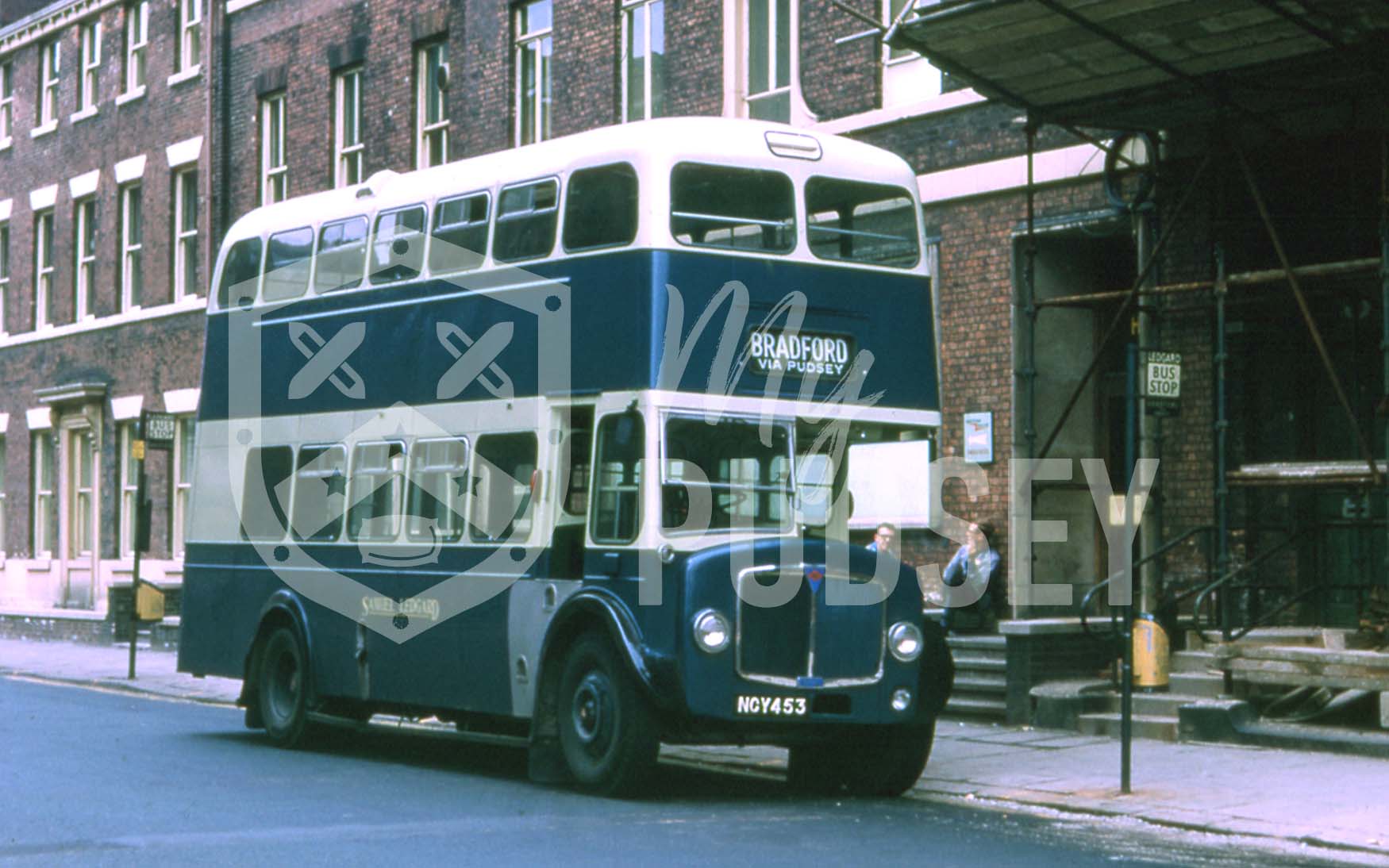 Probably the most famous local operator and became the leading independent bus company in the area. Although Sam Ledgard’s are probably the best remembered, they were an Armley based company. I could write you a book about them, however the Pudsey connections are brief but very important to this story.

Samuel Ledgard started out when he purchased a petrol-engined Karrier in September 1912, this early initiative allowed him to catch key routes between Leeds, Bradford, Armley, Horsforth and Otley. The smart blue and white livery of Ledgard’s buses could be seen everywhere.

1942 – Wartime routes serving the Avro munitions factory at Yeadon from Leeds and Otley were allocated to Samuel Ledgard and necessitated the provision of buses in camouflage livery (a stipulation that was not always adhered to!), an AVRO special was to become a common sight stopping en route at Pudsey Town Hall.

On the 8th March 1957 the Troydale – Pudsey – Calverley stage carriage licence of Kitchen and Son, of Pudsey, was acquired, in exchange for Ledgard’s tours and excursion licence from Pudsey Town Hall. Four vehicles were taken over as part of the deal, two Atkinson and two Guy single-deckers. Thus connecting Ledgard’s firmly to the Pudsey buses story and becoming a much loved local service.

Did you know? Samuel Ledgard was also an official caterer to the King and Queen and held a Royal Warrant. Samuel Ledgard died in 1952 but his Buses continued with his name until Ledgard’s officially ceased to exist at midnight on Saturday the 14th October 1967. On the final day of operations the Ledgard fleet numbered 99 vehicles, of which, West Yorkshire subsequently used only 12.

From that point on all the same routes were served by the Leeds City Transport buses in their green liveries. 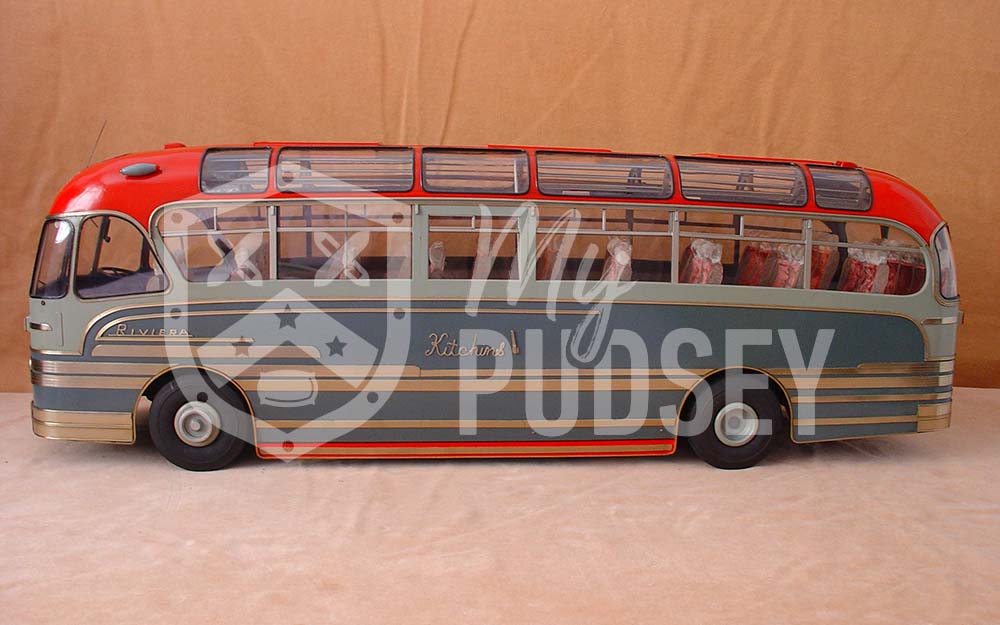 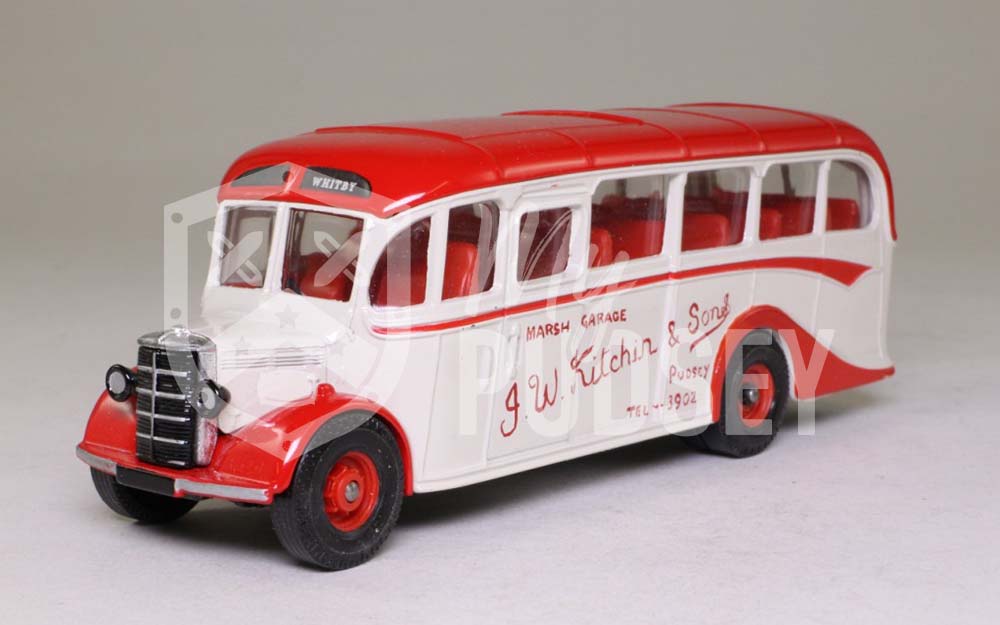 Join us at Pudsey Carnival 21st May!!

Our Carnival bus tours are returning for 2022! Taking a trip down memory lane onboard our heritage bus special, each tour departs at:

and lasts approximately 20 minutes and starts and finishes at the Carnival field.

*We are requesting an optional minimum donation of £2 per seat to support the fantastic work of Pudsey Carnival and Pudsey & District Civic Society, with tour programmes available on the bus (donations collected onboard the bus on the day)

With thanks to Brian and Lisa Farrar for sharing the Kitchin’s story, and Paul Colbeck for permission to use the Anbrico models. 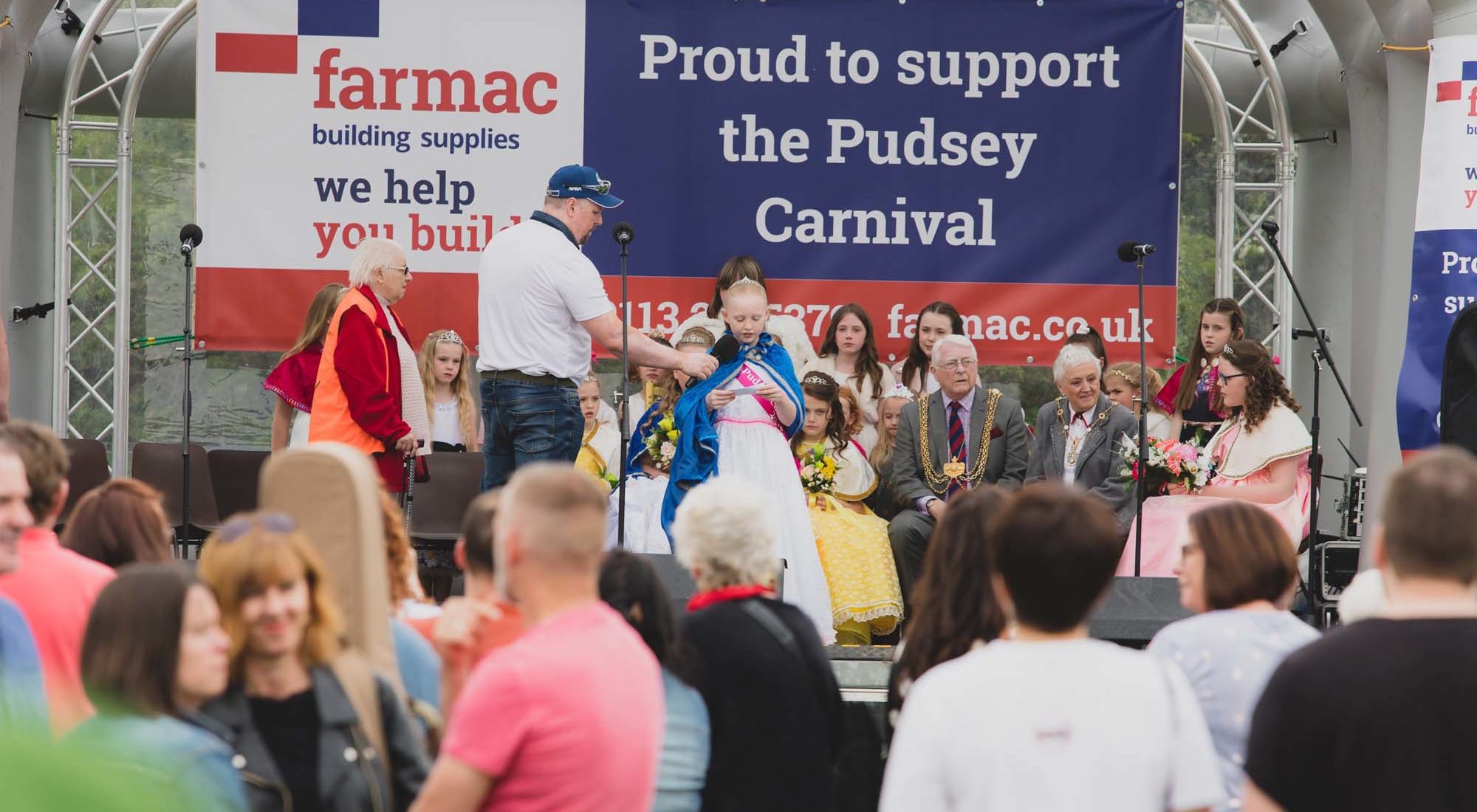